Fire Up The Competition With The Best Football Slots & Casinos 2022

Do you fondly remember dribbling with your friends for hours after school? Are you an avid watcher of football events, who can’t wait for FIFA World Cup 2022 to begin? Combine your online casino play and your love for sports with these top football-themed slots!

Football-themed slots are a special category of sports slots centred around the game of football.

Football has long gathered impressive crowds of fans and is now one of the most well-known sports in the world. It is also a cultural phenomenon, element of national identity, and a popular pastime in countries as far afield as the UK and Brazil.

The goal of football – forgive the pun – is simple:

Players must kick a ball to score a goal, and the team with the highest number of goals at the end of the match wins.

Football fans never miss an opportunity to enjoy their favourite game, whether they play the iconic FIFA video game series, watch their favourite live championships (e.g. the World Cup), or spin at online slots with a sporty theme.

What Are Football Slots?

The vast majority of football slots bring tribute to popular sports events – they are set at the centre of the action, on a massive pitch, while the roar of the supporting crowd accompanies our spins. It’s not uncommon to see signed jerseys, football boots, arbiter whistles, or famous players in symbol-form on the reels.

Other times, football slots can simply be focused on the game itself – celebrity protagonists are replaced by Minion-like creatures or even animal cartoon characters.

To recreate the adrenaline and excitement of a real match, tournament, or famous football event, special sound and visual effects are used . These include crowd cheers, stadium lights, and realistic football waves.

New slot games with a football theme, on the other hand, improved significantly in all of these regards. Plus, they can be played on the go and have a heap of rewarding bonuses.

The Most Iconic Football Slots of All Time

The football theme is a gift that keeps on giving for studios aiming to capitalise on players’ passion for the sport, as well as gather fans of their own in the process.

To make your choice easier, we’ve brought together the highest-ranking football slots of all time, based on popularity, presence at online casinos, engagement, features, and RTP. 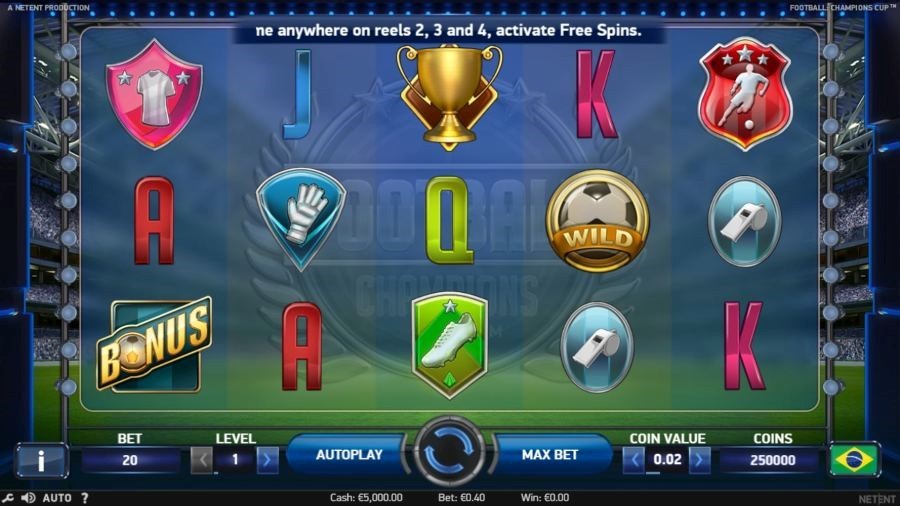 Released in 2016, NetEnt’s Football: Champions Cup was one of the first World Cup video slots to hit the market. It has a simple layout of five reels, three rows, and 25 fixed paylines, as well as a modest maximum win of 1,000x your stake.

Upon opening the slot window, players can choose from a list of country flags: so, if you’re ready to be patriotic and play for yours, it’s the perfect opportunity!

There is a generous selection of Wild symbols, such as overlay Wilds and scoring Wilds, which appear at different stages of the gameplay, helping you form winning combos. A free spins bonus round is also provided should you match at least three Scatter Cup symbols. However, the real star of the show is the Penalty Shootout Bonus Game, which gives you four opportunities to shoot the ball, score, and win cash prizes. 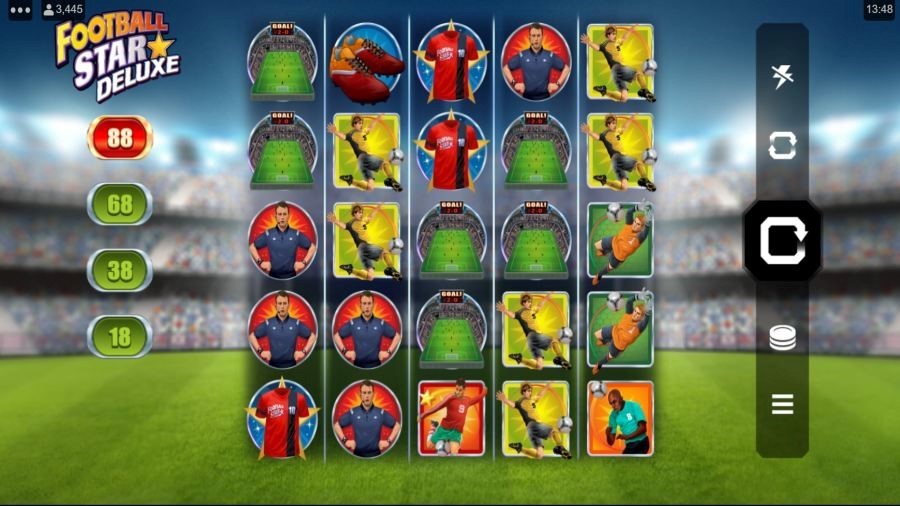 The Football Star slots series was a breakthrough for Isle of Man-based studio, Microgaming, with both instalments enjoying massive success. Football Star Deluxe came with a few notable improvements – gamblers can play on a layout of five reels and select various payline configurations: 18, 38, 68 and 88.

The game has numerous features:

A modern multiplier trail is also in place, with the value of the multiplier increasing after each consecutive win, up to a maximum of 8x. Depending on the number of selected paylines, the estimated RTP can vary from 96.18% to 96.88%. The maximum win is capped at 3,200x. 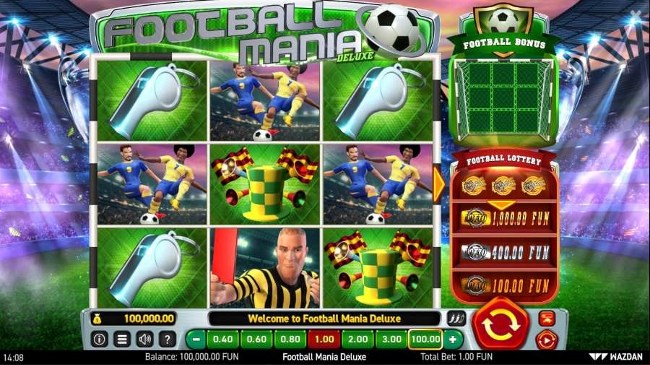 Wazdan’s Football Mania Deluxe is a perfect mix between the vintage slot machine design and contemporary game elements, such as the ability to choose different volatility modes.

We’re once again back at the pitch, cheering for our favourite team, as bright stadium lights fire up the atmosphere. The extras provided are nothing short of unique: we have a Football Matrix Bonus Table that players must fill with football symbols to receive free spins.

In addition, you can trigger a lottery-style pick-and-click bonus game. Landing the lottery symbol in the middle three reels will start the feature; then, you can choose from three lottery tickets and redeem your instant cash prize.

Wazdan further prepared additional game modes to customise your experience. These are: 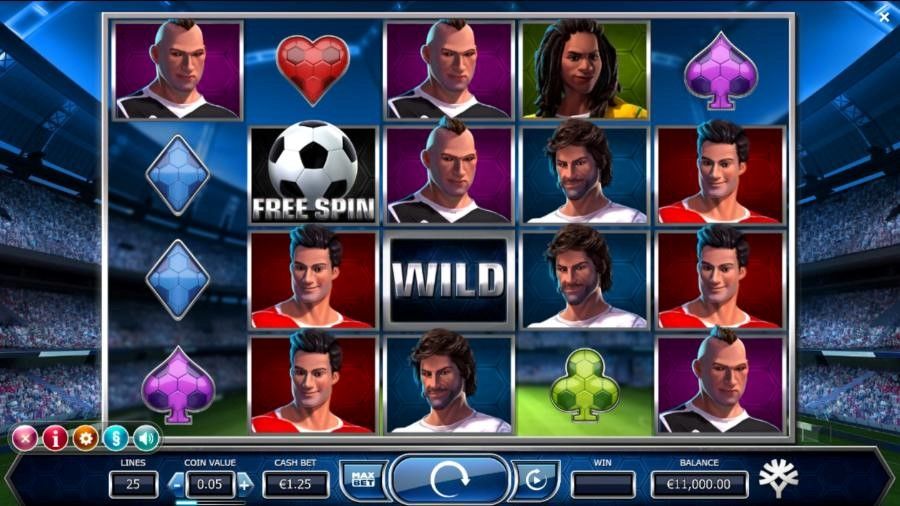 Don’t be deceived by the name: this sporty gem from Yggdrasil has nothing to do with bicycles and everything to do with an explosive football game! In fact, ‘bicicleta’ is a Spanish term that refers to the scissor kick in football – undoubtedly, one of the hardest moves to execute!

Released in 2016, Bicicleta is a five-reel video slot with 25 paylines. Thanks to its medium volatility, you can expect consistent wins with a manageable level of risk. The high RTP of 96.3% also favours the player.

Although it’s set in the midst of a tournament, with crowds cheering from the bleachers, this game is more character-led than other football slots. We have four players driving the action, and if one of them scores, they will transform into a sticky Wild symbol.

On top of this, gamblers can collect trophy symbols to gather extra coins or trigger free spins. 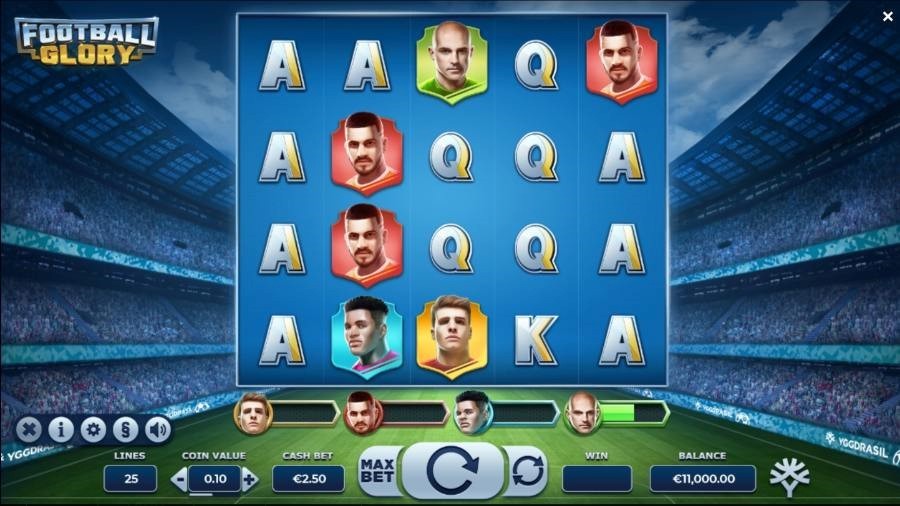 We’re finishing up our list with another football-themed game from Yggdrasil, the fabulous Football Glory slot, launched in 2020. This one comes with a great maximum win of 4,000x (€500,000), a medium-high volatility ranking, and an above-average RTP of 96.1%.

The game is filled to the brim with extras: at any point during the spins, you can trigger the Gold and Silver Cup feature, which rewards you with free spins, extra Wild symbols, and a coin prize. Matching at least three Scatter symbols triggers the free spins feature, which, before it commences, gives you four random modifiers that can include sticky Wilds or extra cups landing on the reels.

A very innovative addition is the Glory Meter that fills out whenever you land high-paying symbol combinations. This rewards gamblers with 7 free spins, then, one of the players will go into Superstar Mode: it scores a goal and transforms into a sticky Wild symbol.

With the fast-approaching FIFA World Cup Qatar 2022™ on everyone’s radar, developers haven’t missed the opportunity to celebrate in advance with football supporters worldwide.

In fact, the pace of slot releases tackling the world of football increased considerably since 2020. So, if you want to be kept up to speed with the latest launches of the genre, check out our top 10 must-try list below:

Sports in general is a topic of interest for casino software developers, as studios aim to attract loyal fans of ice hockey, tennis, cricket, basketball and, of course, football.

Because the latter is the largest community in the world, a growing number of providers joined the ranks in recent years and took a slice of the football slots pie. Here are a few:

And, if you want to hear our honest opinion about their creations and learn how we rank the best slots, look over our article dedicated to slot reviews.

Casino Bonuses To Use on Football Slots

There are a number of casino bonuses granted by operators to football fans. A popular offering is the no deposit bonus, which is available to new players after they register and verify their account. It’s common to receive a set number of free spins at a popular football slot, or £/€/$5 – £/€/$10 in extra credit.

If you’re ready to commit to a gambling platform and make a first deposit, the online casino will match it by 100% or 200% on average. Welcome bonuses can also be granted in the form of unlimited 10% cashback (for example, on UK brand All British Casino).

With the largest number of active fans at over 3.5 billion (according to WorldAtlas.com), football is, without a doubt, the most watched sport globally. That said, it’s not the only sport you can choose from if you’re looking to spice up your next gaming session. Here are some handy alternatives:

Particularly popular in India and England, cricket is a highly strategic game, drawing equally impressive crowds. As a result, there are quite a few slot games with a cricket theme available online, like Cricket Star, Premier League Cricket, and God of Cricket.

Are you in the mood to channel your inner Michael Jordan without moving an inch? Shoot hoops from your living room with Basketball Star, Slam Dunk, or the Basketbull Slot.

According to research quoted by Tennis-Tourtalk.com, roughly 85 million people watch tennis across the world. Naturally, developers got the memo and released many online slots dedicated to this sport, such as Centre Court and Wimbledon.

Football slots provide the best of both worlds for online casino fans who also love watching or playing football. They get to support their country from the sidelines in its race for the grand cup and grab some in-game extras, like free spins or instant cash prizes.

Highly entertaining, visually appealing and packed with bonus features, football slots have made a massive comeback just in time for the much-anticipated 2022 World Cup!

Football slots are, by definition, a niche category of slots, tackling football games or events. Overall, they come in smaller numbers, compared to more popular slot themes, like vintage Vegas or Egyptian mythology.

You can try out football-themed slot games in demo version or for real money at a number of global casinos and real money slots sites, such as LeoVegas, Energy Casino, and Betamo.

Absolutely. New football slots have been created using HTML5 technology, so you can play them with no issues on smartphones running on Android/iOS software or tablets. However, do keep in mind that older releases from 2007-2010 may not run well on modern devices.

We’re glad you asked! Yes, there are namely Spin & Score Megaways™ from Pragmatic Play, Spinions: Game Day from Yggdrasil, and Endorphina’s brand-new Football: 2022. We’ve reviewed some of them already right here, on Top10-CasinoSites.