Play Free Live Casino
This website uses cookies. By continuing, you agree to our use of cookies. Find out more here.
⟨
Online CasinosOur Guide To The Best Viking Slots 2023

Our Guide To The Best Viking Slots 2023

Viking slots have fantastic storylines and are rich in in-game bonuses and features. So, why play a boring fruit machine when you can go on an epic Dark Age adventure?

What Are Viking Slots?

There are many reasons why the seafaring Scandinavians continue to capture our imagination. They are, after all, the stuff of legend and one of the best-known elements about the Dark Ages.

So, is it surprising that popular history continues to celebrate their legacy, tell their stories, and dwell on their terrifying actions? We don’t think so – and clearly, neither do the thousands of players across the globe who play Viking slots on the daily.

Viking slots have themes that revolve around these Norsemen and women, as well as their gods. With symbols, bonus features, and soundtracks that hark back to a darker, more magical time when these plunderers conquered the sea with their master shipbuilding skills.

Vikings have become one of the major themes in the world of real-money slots, so you’ll be able to find tonnes of titles that take inspiration from these Dark Age warriors.

Nevertheless, interestingly, while working on our Viking slots guide, we realised that these titles can also be subdivided into two distinct themes.

Norse mythology is the umbrella term used for the religious stories told by Vikings. These stories were used to help believers make sense of the world, usually revolving around Norse gods like Thor, Odin, Loki and Freya, who dwell in Asgard.

They can also be related to other entities like Odin’s Valkyries, whose job was to guide souls to Valhalla, a part of Asgard often thought of as Norse heaven.

Video slots based on this mythology are abundant and so are the elements they choose to focus on. In fact, while some focus on one character, others take a more generic approach. Either way, such slots tend to be full of magic and lightning!


Norse Mythology Slots to Check Out

The Vikings weren’t just their beliefs, however. In fact, they are still remembered for:

All of these things can feature in Viking slots, and that’s always a good thing because it means that there’s so much to draw inspiration from that no two games are alike.

The real question is why not?!

Viking slots can be super fun, combining great video slot mechanics with a captivating theme that can be historically-, mythologically-, or fantasy-driven.

They also tend to be created by the best providers out there with crisp graphics and themed soundtracks that really help you immerse yourself in the game.

Moreover, some of these slots – like the Thunderstruck II slot – have made it to the top real-money slots lists of all time. Therefore, it’s safe to say that this theme is by no means a passing fad.

Our 5 Favourite Viking Slots of All Time

With dozens of Viking slot titles out there, it’s hard to know which one you should play first… To make life easier, we’ve reviewed our five absolute favourites. 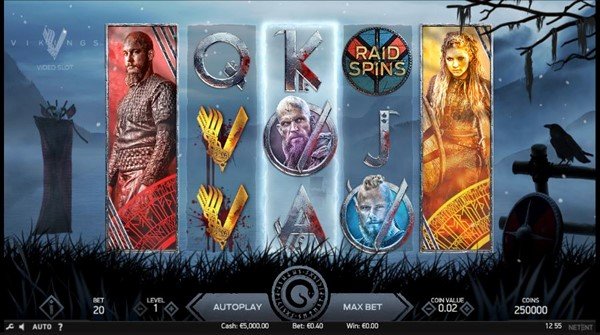 Are you ready to join the legendary Viking Ragnar Lothbrok and to cement your name in one of his sagas?

Vikings is one of the best TV slots around, and it’s stocked by many of the top casinos with NetEnt games. As the title makes obvious, this game is based on the hit series originally created for the HISTORY channel.

In fact, you’ll join Lagertha, Bjorn, Loki, and, of course, Ragnar himself, to pillage and plunder your way through a three-reel and five-row grid with high volatility and an RTP of 96.05%.

You’ll also find plenty of help through the themed bonus features here. These include a Shield Wall Feature, where mystery symbols transform into potentially winning combinations, and Raid Spins, during which an expanded grid gives you up to 125 betways. 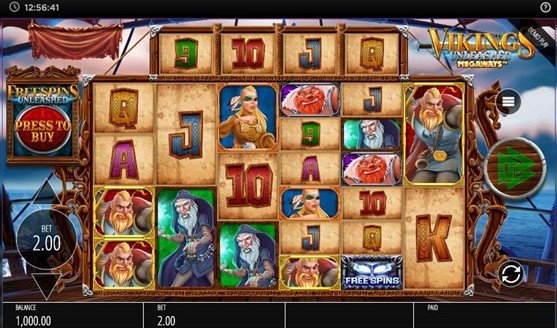 The Nordic warriors have set sail across the vast ocean and they’re about to reach the coast of North America. As waves crash against the longship, your job is to help them secure their victory.

It’s saye to say that in the colourful Vikings Unleashed Megaways™, you’ll find everything you’ve come to expect from the best Megaways™ slots.

This includes 117,649 ways to win, Cascading Reels, a grid made up of six reels that can each accommodate up to seven symbols, as well as a top tracker with four extra symbols… But there’s so much more this high-volatility game offers. 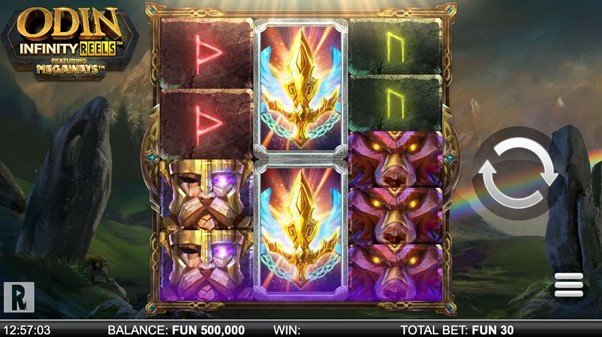 Invoke the power of Odin, Norse god of wisdom and magic, to bring forth wealth and fortune ahead of battle.

This collaborative effort by ReelPlay and Yggdrasil was the very first in the entire world to combine two ground-breaking mechanics.

Here, ReelPlay’s Infinity Reels™ adds a reel to the grid every time you land a winning combination.

Meanwhile, Big Time Gaming’s Megaways™ mechanic – under license to Yggdrasil – increases the number of ways to win up to infinity, depending on how many reels are present and how many symbols fall onto them.

But there’s more! This high-volatility game has a symbol multiplier in the base game that is applied to all symbols and has no limit, while the free spins feature also comes with sticky multipliers.

However, Odin – in his infinite generosity – also offers two jackpots: a max win of 20,000x your stake, plus an 888x Infinity Bonus. 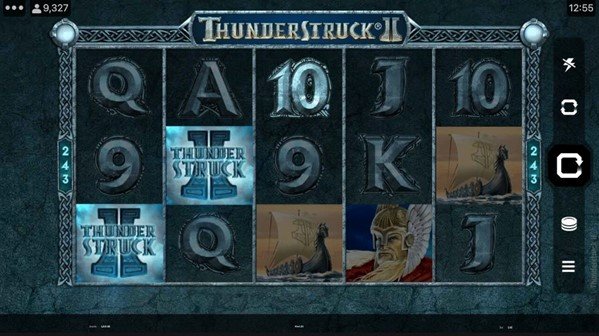 Will you be one of the chosen few?

In this icon of the Viking slots world, the three most powerful residents of Valhalla – gods Loki, Thor, Odin – are joined by the Valkyries in their quest to choose which Norse warriors will make it to Viking heaven.

And since you enter Valhalla with everything you own (given its with you on the pyre), your main job is to loot and plunder as much as you can.

Sounds awesome, doesn’t it? Well, with its fantastic theme, Thunderstruck II is genuinely one of the best slots available at the finest Microgaming casino sites. In fact, there’s a lot to discover in this low-volatility game, especially when it comes to bonus features.

Among our favourites are The Great Hall of Spins, where you can win up to 25 free spins with extra features (including 5x win multipliers and magic wilds) and the Wildstorm feature that can award you up to 8,100x your stake. 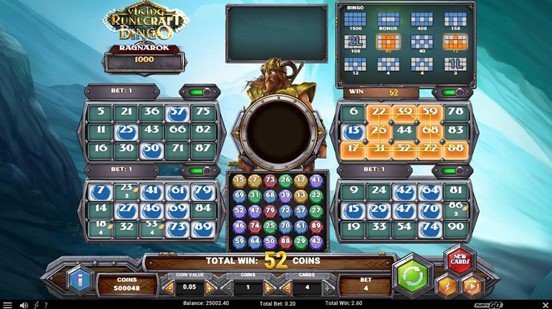 Bingo may not be synonymous with the Dark Ages or plundering Norsemen, but we live in a postmodern world that has successfully combined the two.

In Viking Runecraft Bingo, god of thunder Thor stands watch over an urn that dispenses bingo balls. Just like in the original game of chance, you win whenever the numbers that fall from the urn match with those on one line or a whole card (house).

But, of course, as in most online games, particularly slots, this game also comes with some fantastic bonuses. In fact, on top of being able to buy extra balls, there are numerous bonus games and prizes to be won – some of which go up to 1,000x your stake!

This game, which has an RTP of 95.87% and high volatility, is among the best Play’N Go titles.

Viking slots are something most slot developers have dabbled in, and that is certainly not a bad thing. After all, it’s the reason why we have so many fantastic titles and so many cool twists to the themes.

Even so, come casino games software providers have created masterpieces in the genre – and we’re here to celebrate them!

Microgaming for Thunderstruck II, which unites many-a-Norse god in a game that has generous bonuses and beautiful graphics that have stood the test of time.

ReelPlay and Yggdrasil for Odin Infinity Reels™ Featuring Megaways™. This collaboration gave us a slot with so many features and bonuses that it’s hard to beat!

This joint award goes to 4ThePlayer for 2 Gods: Zeus Vs Thor; and Microgaming & Just for the Win for Tiki Vikings. Both slots are great examples of how combining themes can create something spectacular.

NetEnt for Vikings. We love how this slot ties into the series!

Are you looking to while away some time or test a title before you stake real cash on it? Many Viking slots casinos offer players the chance to try out demo versions of these games completely for free. Moreover, websites like ours often stock demos of video slots, too.

In fact, we always recommend playing a demo of a video slot before you begin playing for real money. We’ve outlined in the reasons why in our article dedicated to the benefits of playing free play casino games online, but the most obvious is that this gives you the chance to find out whether the slot in question tickles your fancy or not.

Remember, though, that playing for free means you won’t win any real cash and won’t make you eligible for any Viking slots casino bonuses.

While many of the best online casinos Europe do not require players to sign up to try free slot games, the best UK online casinos do need you to sign up and login at the Viking slots casino. This is due to a UKGC regulation that aims to curb excessive and underage gambling.

Other Themes to Consider

If Viking raiders and gods are not your cup of tea, then you’ll be happy to know that there are plenty of other themes you can pick from.

A Final Word on Viking Slots

With the Dark Age raiders being such a popular topic – both for history buffs and pop culture enthusiasts – developers often put everything they’ve got into their Viking slots. In fact, whether you’re a fan of the subject or not, we’re sure you’ll find at least one title that will join your list of favourites!

Viking slots are real-money slots that have a theme related to Norse mythology or Viking explorers. These tend to have storylines, soundtracks, symbols, and even special features related to this theme.

There are loads! Head up to our Top Table List for our five favourite Viking slots and the best casinos where to play them!

We haven’t come across any casinos that offer free spins specifically on Viking slots. Nevertheless, you can use your credit from the best online casino welcome bonuses to play Viking slot free spins.

Since many of the world’s best game developers have created Viking slots, pretty much all legal and licensed top casino sites carry at least one Viking game. In other words, yes, all casinos are Viking slots casinos!

Certainly! Many Viking slots have been created with mobile users in mind. In fact, you can find them at many of the best mobile casinos and the best real money gambling apps out there. Nevertheless, there are some famous Viking titles that are old, so those may be harder to play on mobile.

Most Viking slots have an RTP of 96% and over. This is quite average, especially when compared to the best highest RTP slots.