This great population and its culture are a huge source of inspiration for casino game developers and are equally enjoyed by players all across the world.

Top Most Exciting Aztec-Themed Slots in 2022

John Hunter and The Aztec Treasure

What Are Aztec Slots?

Aztec slots is a generic term that can refer to both aztec themed slot machines found in land-based casinos or modern online slots with an ancient Aztec theme, such as Aztec Temple slot or Wild Turkey.

Both types of  casino games feature an artistic reinterpretation of the famous Mesoamerican culture, with each developer bringing its unique touch in terms of gameplay, bonus features, setting or symbol design.

Top 5 Most Popular Aztec Themed Slots of All Time

If you’re ready to start your eerie trip to the Aztec pyramids, here are the best casino games to take you there right now: 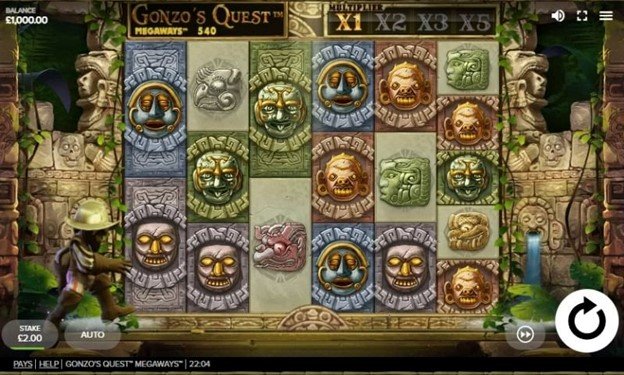 This time, the Spanish explorer returns to the ancient city of El Dorado and more mysteries lurk ahead than ever before.

This game features a structure of 6 reels, 2-7 rows and up to 117 649 ways to win. Its RTP score of 96% is above the industry average – however, the level of volatility is also high, meaning that you can expect big wins with a lower frequency.

Among the highlights of this Aztec themed slot, we can identify the avalanche feature, which creates perfect opportunities for consecutive wins. During the base game, players can also enjoy a multiplier of 1x-5x.

Other notable bonus rounds are the Earthquake Feature (triggers randomly, removes all low-paying symbols), Unbreakable Wilds (wild symbols do not explode, instead they remain stuck to the reels) and Free Spins (triggered by 3 or more golden Free Fall symbols). 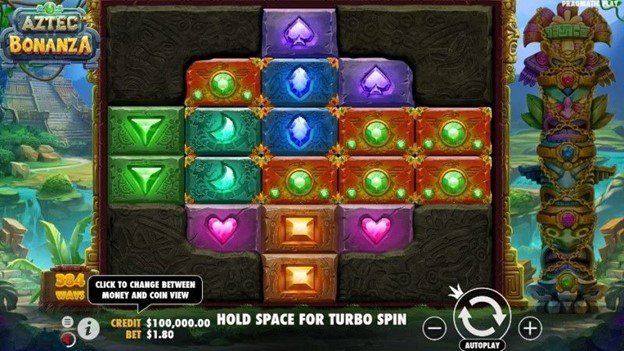 It features the world-class Megaways™ mechanic under licensing by Big Time Gaming – as such, on any given spin, players can get a varying structure of 5 reels, between 2-6 rows and between 384-7 776 ways to win.

The game also features tumbling reels, which is another name for the cascading reels mechanic – after every winning combination, the symbols involved get blasted from the reels and new ones appear in their place.

Moreover, players can enjoy three exciting bonus rounds – Symbol Unlocking (you need two successful tumbles to remove one of the blocked stone corners on the reels), Mystery Symbols (they come to play once you can unlock the top left corner) and Free Spins (triggered once all four stone corners are uncovered). 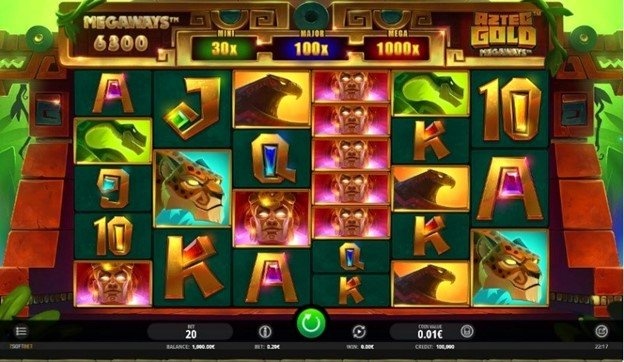 Its RTP score of 95.99% is slightly below industry average for most Megaways™ slots. However, the game compensates this aspect by providing cascading wins and two other bonus features.

The main bonus feature is called Aztec Gold Cash Respin and is triggered by 5 sun disc scatter symbols on the reels, which reward the player with 3 respins. 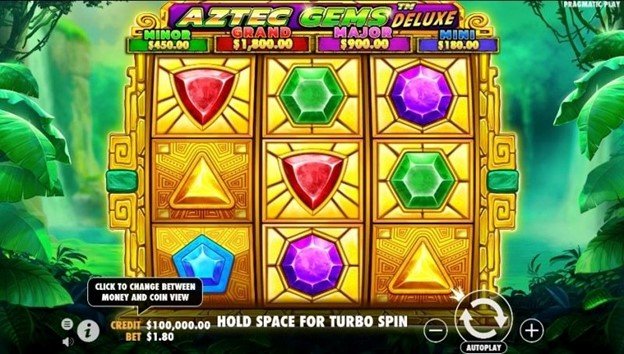 Aztec Gems Deluxe is a colourful video slot in Pragmatic Play’s library that features two themes players know and love – bright jewels, as seen in other successful launches such as the iconic Starburst  and the ancient Aztec civilization.

Aztec Gems Deluxe has a layout of 3 reels and 9 paylines, with an attractive RTP score of 96.5%. The game only has one bonus feature, but it’s an incredibly lucrative one called Money Respin feature.

Triggered by 4 coin symbols on the same spin, this feature will award you with 3 respins. Moreover, during this round, the reels will only feature empty spaces and coins, the player’s objective being to fill all the reels with coins.

When you do, the game will award you with 3 extras – Multiplier (respins will get a multiplier of 2x-10), Wheel of Fortune (every spin can bring you between 18x-388x your total stake) and 4 jackpots (Mini, Minor, Major or Grand, worth between 100x-1000x your total stake).

Aztec Twist is a lesser known Aztec-themed slot released by software developer Hacksaw Gaming, but one that’s worth putting on your radar for many reasons.

Aztec Twist has a structure of 5 reels and 8 rows and uses a Cluster Pays system.

A winning cascade is triggered by 5 or more matching symbols horizontally or vertically on the game grid, with a maximum of 21 symbols in a single cluster.

We can also find a few notable bonus features – Respins (triggered in the base game if you fill an entire row with identical symbols, with a random multiplier of 2x-8x added on top) and Free Spins (triggered by 3 or more scatter sun symbols, which will award you with 8 extra spins).

Why Are Aztec Slots So Popular?

There are many reasons why aztec-themed slots are the go-to choice for so many players at online casinos today.

The fascination of ancient civilizations, the mysticism surrounding the Aztecs who were known for their art and architecture, and, lastly, the endless possibilities game studios and developers have to work with this theme.

If the Mayas are known for predicting the end of the world, the Aztecs are a more elusive culture shrouded in mysticism and contradiction, but also advanced enough to build a calendar system.

For that reason, the Aztec theme remains an endless source of inspiration for prestigious casino game developers such as IGT, Amatic, Pragmatic Play or NetEnt.

The Aztec theme is right up there alongside other incredibly well-received gambling themes such as fruits, mythology, riches, music or TV shows.

And, if all of the above explanations don’t hold enough water, there is one final and believable justification – aztec slots are simply great to play, highly entertaining and packed with special bonus features, 3D visuals and realistic sound effects.

The once great Aztec empire is also brought to life via the use of animations, supersized symbols or even symbol explosions – this immerses the player in the world created on the reels and ensures captivating gameplay all throughout.

No eerie trip to central Mexico is complete without the mystical sounds of the jungle.

Top rated aztec casino games such as John Hunter and The Aztec Treasure or Aztec Bonanza excel at creating a suspenseful atmosphere via the use of tribal music blended with nature sounds.

Coupled with the dynamic action on the reels, the game experience becomes all that more authentic.

As we mentioned previously, there is a huge number of software providers that tackle the Aztec theme in so many surprising ways, from NetEnt to Yggdrasil, Play’N GO Pragmatic Playor EGT Casino provider.

Because of that, players can enjoy a wide range of bonus features that all of these providers are famous for and benefit from many top quality slot options.

Many of them have changeable slot configurations on every spin to ensure better win potential and even unique features such as Hold&Win, popularized by Playson or Megaways, developed by  Big Time Gaming.

If you seek to find and play the best aztec games online, you’ll be pleased to learn the vast majority of online slots featuring this theme have high RTP scores of 95-96% on average.

However, the actual win potential in practice is much more attractive if you also consider the presence of multiple paylines, free games, progressive jackpots or increasing multipliers.

If you’re a beginner who wants to try his first aztec slot game for free without any risk, look no further – this is possible at any of the licensed casinos recommended in our list above.

You can even try top-rated Aztec slots like Wild Turkey or Temple Tumble Megaways™ on mobile devices and tablets. And, if you want a next-level experience, more bonuses and features, you can also download the casino’s mobile gambling app!

Slot streaming is a relatively new phenomenon that is becoming increasingly popular on the biggest video streaming platforms in the world, such as Youtube or Twitch.

In fact, according to public stats by Twitch, casino streamers regularly attract between 5k-15k viewers per month.

Similar numbers can also be observed on Youtube on the most well-known streaming channels like NG Slots, Call Attendant Slots or Chipmonkz Slots.

And, a lesser known fact is that many streamers like to broadcast their gameplay and subsequent wins at popular Aztec slots like Aztec Twist, Aztec Temple or Aztec Gold Megaways™.

Here’s an example of a truly magnificent win:

There are many reasons why Aztec-themed slots are such player favourites in 2021 – the fascinating history of the Aztec empire, the intricate design of the pyramids, jungles and other special symbols on the reels, coupled by the modern gameplay elements.

Lastly, Aztec slots are a solid choice for players who want to play high paying casino games with tons of bonus features such as multipliers, jackpots or cascading reels.

If you’re looking for great diversity when it comes to aztec slots, our top recommendations are Kingbilly and Casumo, but you can find more suggestions in our table above.

Aztec slots is a broad term referring to any slot machine or online slot with an ancient Aztec theme.

Yes. All of the casinos in our table above allow you to play Aztec slots entirely for free, after you sign-up for an account and verify it.