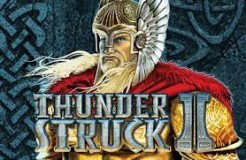 Casinos where you can play Thunderstruck II 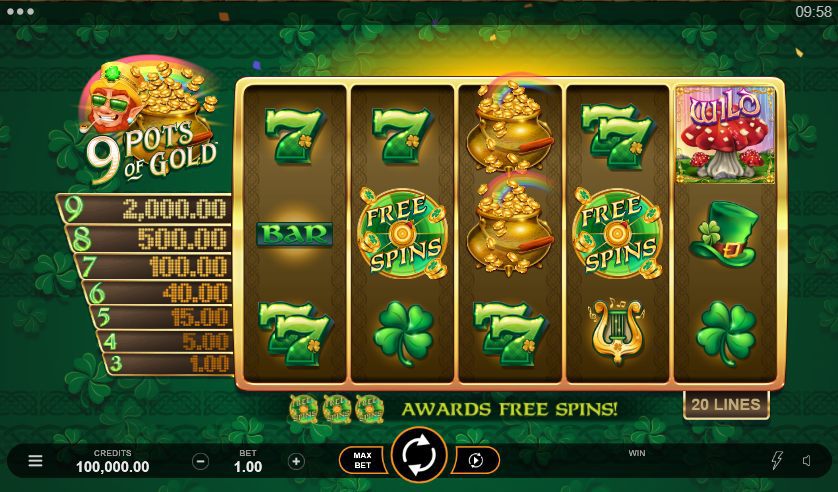 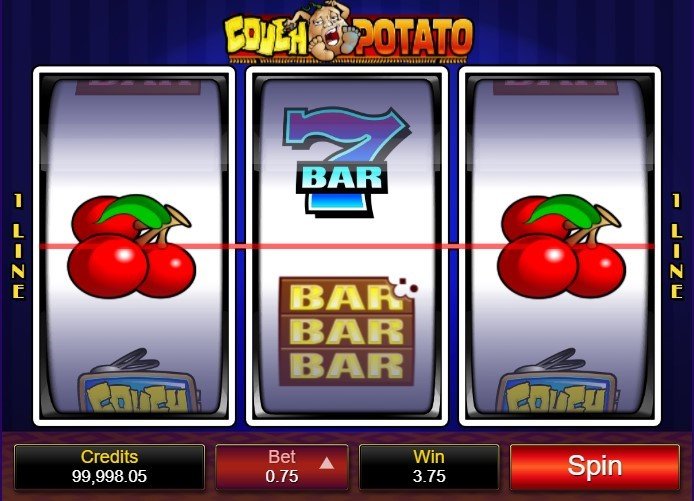 Thunderstruck II is a sequel to Microgaming’s flagship mythological slot, Thunderstruck, and comes with improved graphics and two bonus features. Join Odin, Loki, Thor, and the Valkyries for the Norse adventure of a lifetime and be rewarded with free spins and fully wild reels! 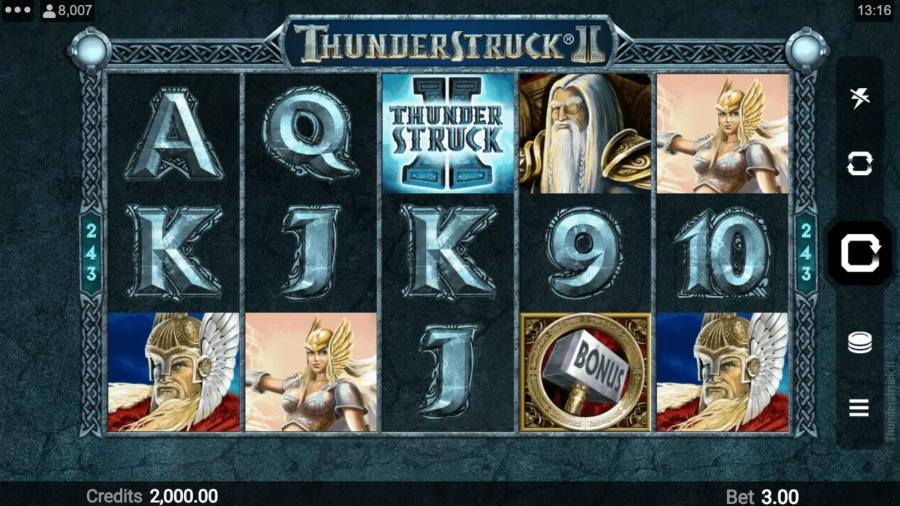 If you’re a veteran gambler, you may remember Microgaming’s Thunderstruck slot from 2003 – a huge hit that’s still one of the most popular online slots.

Today, we’ll be tackling Thunderstruck II and delving into precisely why it stole players’ hearts with its bonus features, RTP, payout, theme, and more!

Thunderstruck II is a video slot released in 2010 by Microgaming. Same as its predecessor, it features a Viking theme or, more precisely, a Norse-mythology theme, and it’s focused on popular otherworldly characters like Thor, Odin, Loki, and the Valkyries.

The sequel comes with multiple improvements in terms of visual quality, reel layout, and bonus features. It also has a modern structure of five reels, three rows, and 243 ways to win, as well as a high RTP score of 96.65%.

Players can trigger fully wild reels, four free spins features based on the Norse gods, increasing win multipliers, and a top payout of 8,000x your stake. 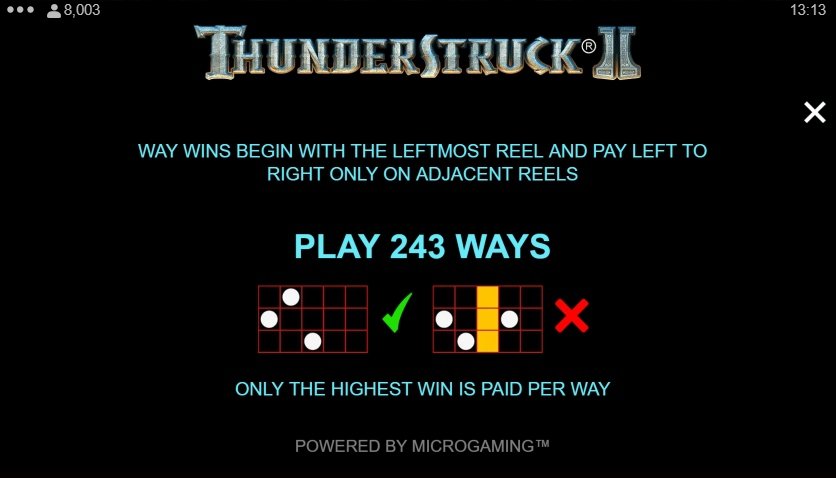 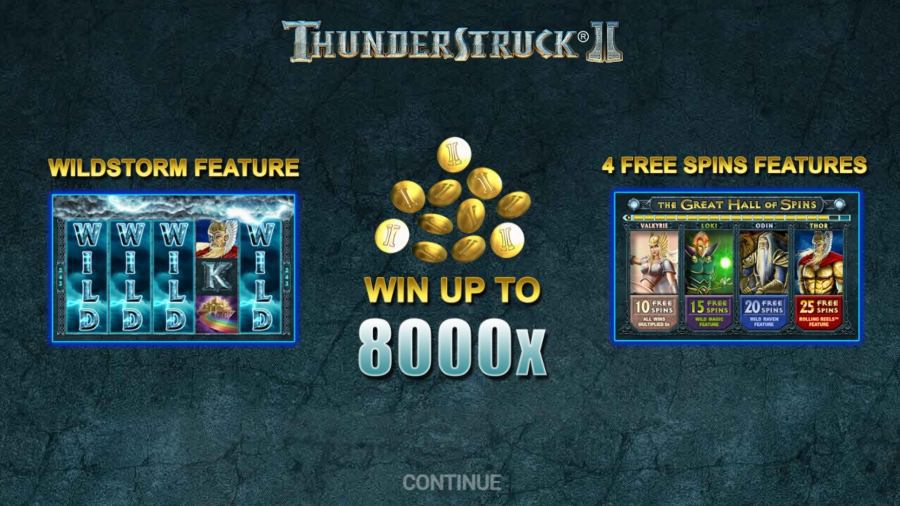 If you are ready to conquer the mythical land of Asgard, Thunderstruck II will reward you with many bonus features.

There is a Wildstorm feature, which will cause multiple wild symbols to land on the reels. And, if you’re lucky enough to be blessed by the Norse gods, the bonus symbols may lead you into the Great Hall of Spins. Here, four different options await, with progressive win multipliers and extra wilds to help you bag some serious wins!

The Wildstorm feature can be randomly triggered in the base game on any paid spin. Once activated, it can turn up to five reels fully wild.

Thor himself will blast lightning across the reels as the transformation happens, making this feature even more striking and visually appealing.

If you can get the maximum number of five fully-wild reels, you’ll earn the game’s top payout of 8,000x your total bet – needless to say, however, this isn’t easy. Also, keep in mind that the free spins feature cannot be triggered while the Wildstorm feature is active. 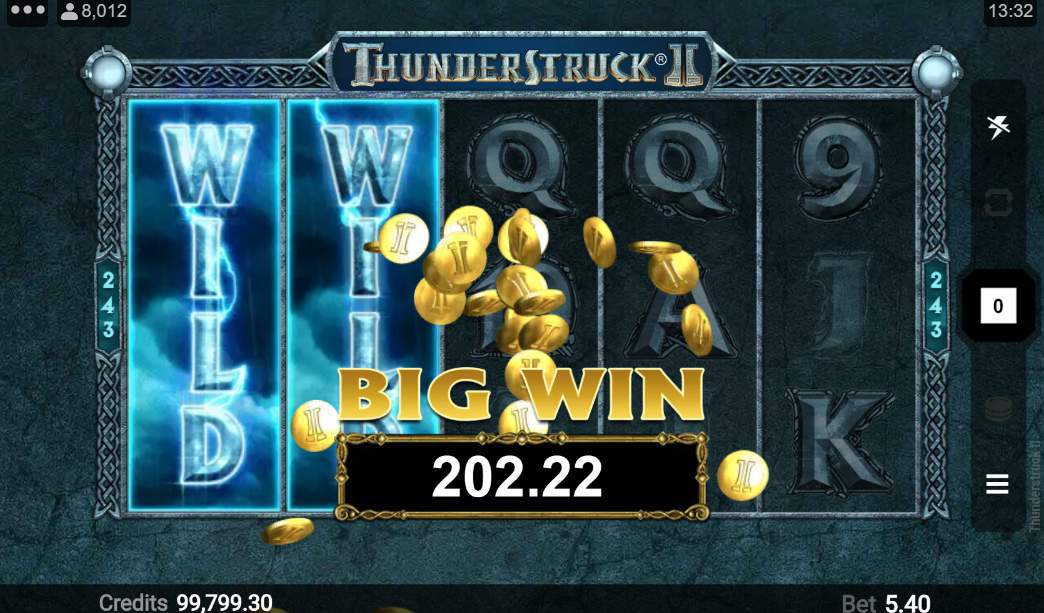 Players must land at least three Scatter symbols (Thor’s hammer, imprinted with the word ‘bonus’ on top) on the playing board to gain entrance into the Great Hall of Spins.

Depending on the number of triggering scatters, players can also win a cash prize as such:

The Great Hall of Spins

The Great Hall of Spins is a multi-level free spins bonus game based on four renowned figures from Norse mythology: the Valkyries, Loki, Odin, and Thor.

If you manage to gain consecutive entries into the Great Hall of Spins, even more features can be unlocked – your entries will be recorded and tracked with a progress bar. 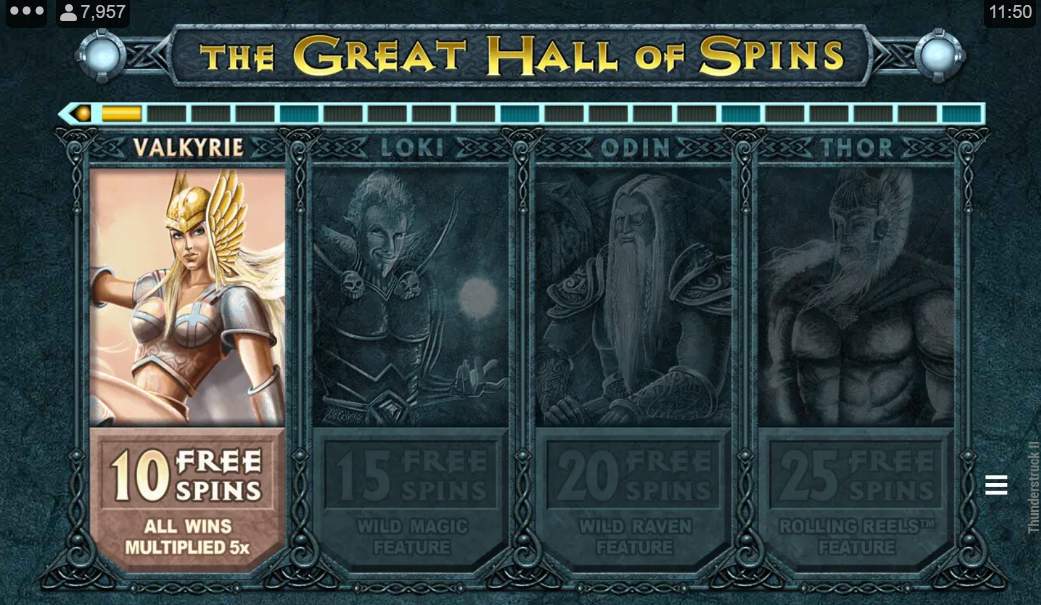 Here’s what each of the four options can bring you:

Another positive aspect is the medium level of volatility. Coupled with the high RTP rate, it makes acquiring medium-sized wins fairly achievable and with a good frequency, too.

The maximum win is capped at 8,000x your stake.

Microgaming is known for its dedication to authenticity, when exploring mythological themes.

This can also be seen in Thunderstruck 2’s choice of special symbols, all of which depict places, objects, and characters significant to Norse myths, such as Valhalla and Thor’s Hammer:

The 9 to A card suit symbols are the low-value symbols, paying between 3.33x and 5x for five of a kind.

Then we have the high-value symbols: 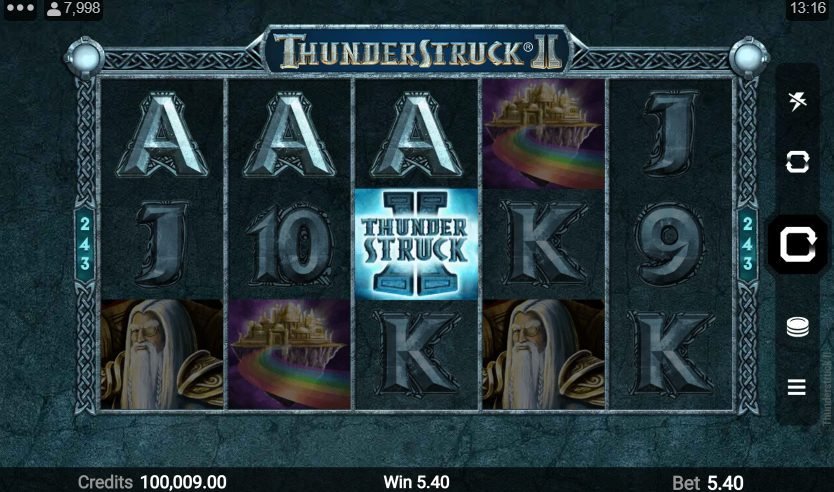 The most gripping aspect about Thunderstruck II is that it immerses you into the realm of the Norse gods straight from the first spin.

Even with the outdated technology of 2010, Microgaming excelled in bringing this mystical realm of warriors to life using exquisite character design, crisp animations, and great graphics.

The ethereal atmosphere is enhanced by the uplifting, orchestral soundtrack rolling in the background. The peaceful music creates a sharp but surprisingly effective contrast alongside Thor’s loud thunder crashing across the reels. 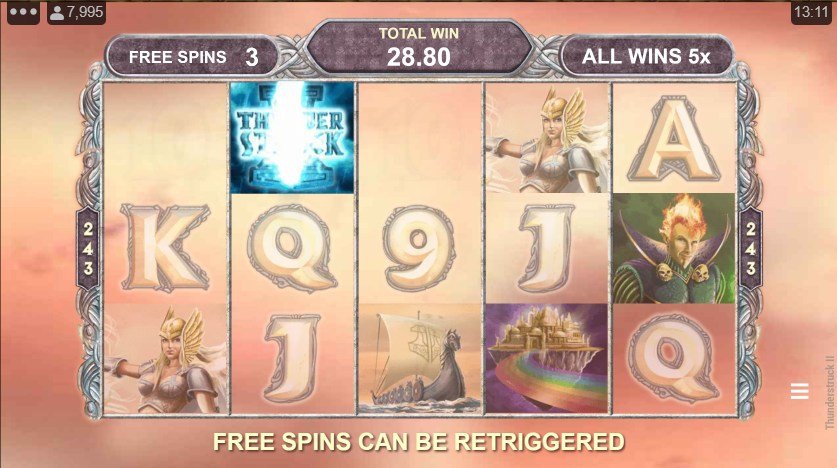 Thunderstruck II has a rather small betting range, starting at 0.3 per spin, up to a maximum of £15. We can safely include it in our low-stakes slots list, while mentioning that it’s a great title for players with low and median budgets – but certainly not appealing to high rollers.

Although the game was released more than a decade ago, it was certainly technologically advanced for its time. Plus, it still plays well on mobile devices, like smartphones and tablets with Android/iOS.

However, we highly recommend checking out the Thunderstruck II Remastered version as well. Released in 2020, it uses HTML5/JS technology, giving you a superior gaming experience as a mobile player. 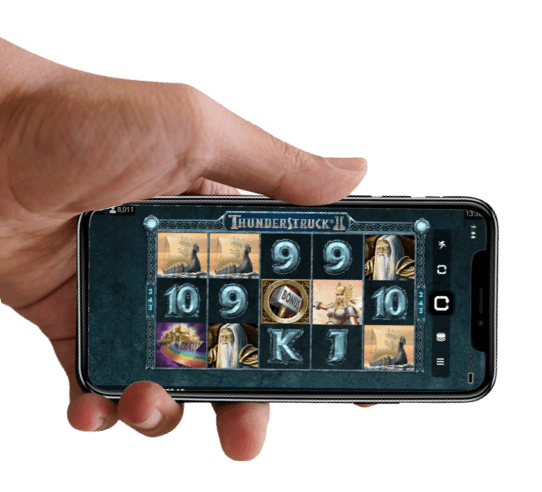 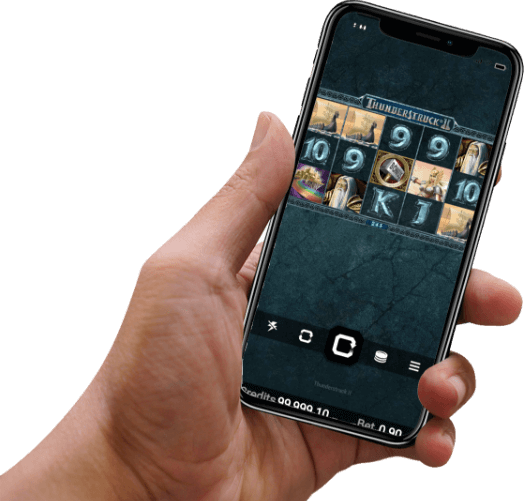 Not so fast, brave warrior! Before you cross over to Valhalla and spin the reels, there are some things you need to know about your upcoming journey:

Our verdict: What’s not to like? Thunderstruck II is not only a high-quality sequel to the original Thunderstruck slot, but also a title that has been insanely popular since its launch and an undisputed classic in the mythological casino games category.

It tackles a player-favourite theme, and is also rich in original bonus features brought to life by our favourite Norse gods. Moreover, although triggering them may take a while, the final result is certainly worth it.

Did you enjoy our breakdown of Thunderstruck II? Check out our other slot reviews!

Thunderstruck II has an estimated RTP score of 96.65%.

Unfortunately, no. Because it’s a rather old game, it doesn’t have a Bonus Buy feature included, so you can only trigger free spins organically. This is done by matching three or more scatter symbols.

The maximum win on Thunderstruck II is capped at 8,000x your stake. You can achieve this through the Wildstorm feature or the Loki Free Spins feature.