Thanks to great themes and extra, in-game bonuses, adventure games are a fabulous alternative to the traditional slot machines. In other words, if you enjoy playing real money slots, then you’ll love adventure slots!

John Hunter and the Tomb of the Scarab Queen

The Voyages of Sinbad

Would you like to know more about the adventure slots we mentioned above? Here we review each and every one of them so you can have a better idea of what the best casino games are like!

John Hunter and the Tomb of the Scarab Queen 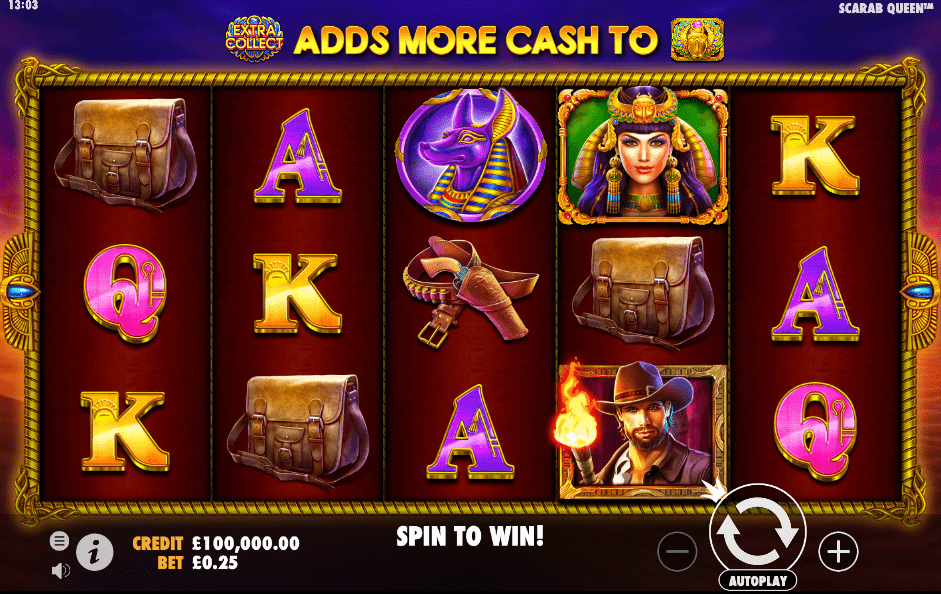 John Hunter is the video slot version of Indiana Jones or Lara Croft, and his adventures are just as fabulous. In this particular title, Hunter looks to find the tomb of the scarab queen and even the most famous female Egyptian Pharaoh, Cleopatra, makes a cameo.

This medium-volatility game has three rows, five reels, 25 pay lines and an RTP of 96.5%, as well as symbols inspired by Ancient Egypt. Things to look out for while playing include Cleopatra herself, which is the Wild symbol, and the Money Collect feature, which appears when a Scarab Money symbol pops up on reels one through to four. 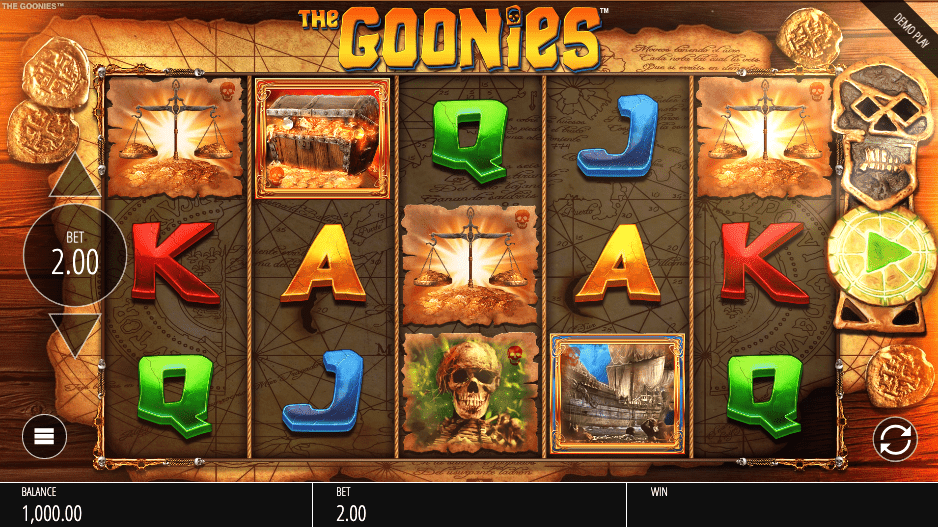 Based on the 1985 film directed by Richard Donner, this Blueprint Gaming video slot is a fabulous way to relive all the adventures, particularly thanks to the symbols, which include treasure chests, scales, pirate ships and corpses. The bonuses are also something to look out for: the Fratelli’s Hideout Bonus, for example, can give you cash adds or even a sub-bonus game.

The video slot itself has five reels, 20 pay lines, six One-Eyed Willy Bonuses, and an RTP of 96%. The graphics are good are the soundtrack rather fun. 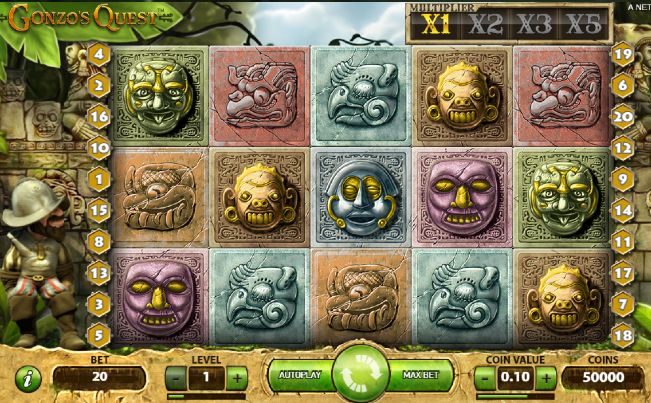 Apart from being NetEnt’s first-ever platinum release, Gonzo’s Quest is also one of the online casino world’s best-loved and most-played video slots. And it’s easy to see why! With a tagline that reads ‘The Search for Eldorado’, Gonzo’s Quest is all about myth, legend and gold.

The game has five reels, 20 pay lines, and the one-of-a-kind Avalanche Reels that let you win up to five times your prize for every winning spin. Gonzo’s Quest also has another incredible feature called the ‘Free Falls Bonus’, which gives you multipliers of up to 15 times for consecutive winning spins. 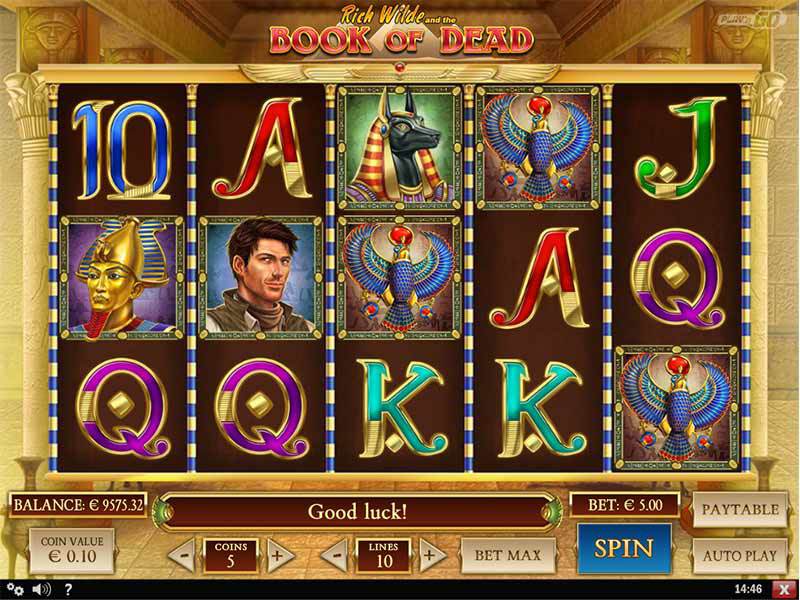 Launched in 2014, Play’n GO’s Book of Dead is similar in scope to Book of Ra, which is one of the most played physical slots of all time. The Book of Dead, however, has become famous in its own right for giving players a wonderous adventure fronted by Indiana-Jones-like figure Rich Wilde.

The game has five reels, three rows, 10 pay lines and two main bonus features. These are, namely, the Gamble Feature, which can be activated any time through the ‘Gamble’ button located below the reels, and the Book of Dead Free Spins, which is triggered when you get three Scatter Symbols anywhere on your reels. 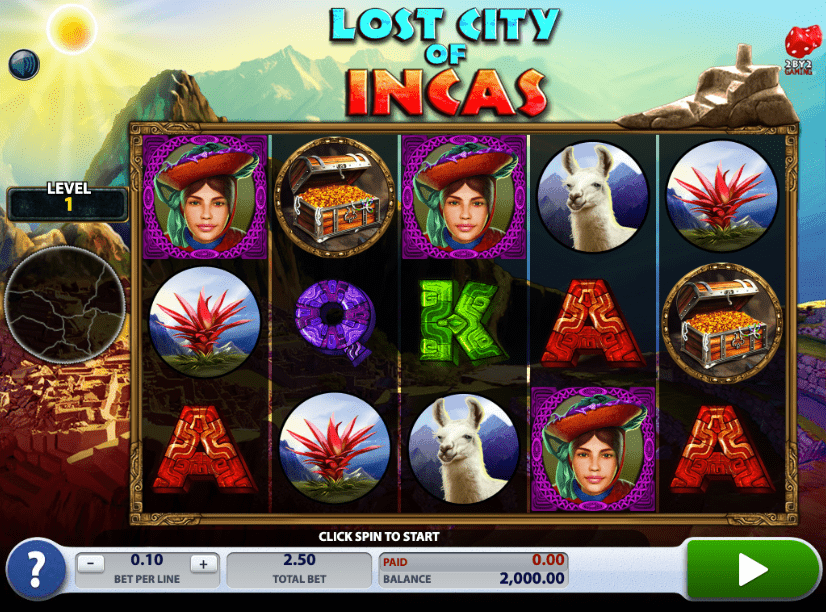 This beautiful game powered by 2 by 2 Gaming allows you to come face-to-face with the Incas, a tribe of Native Americans which was located in the southern highlands of Peru.

In the game, which has five reels and 25 pay lines, you’ll find lots of well-designed symbols, including card suites, plants, treasure chests and llamas. When playing, what you should look out for are the Mystery feature, the Temple of the Sun Bonus feature, and the Achievement feature, all of which help give you more coin for your money! 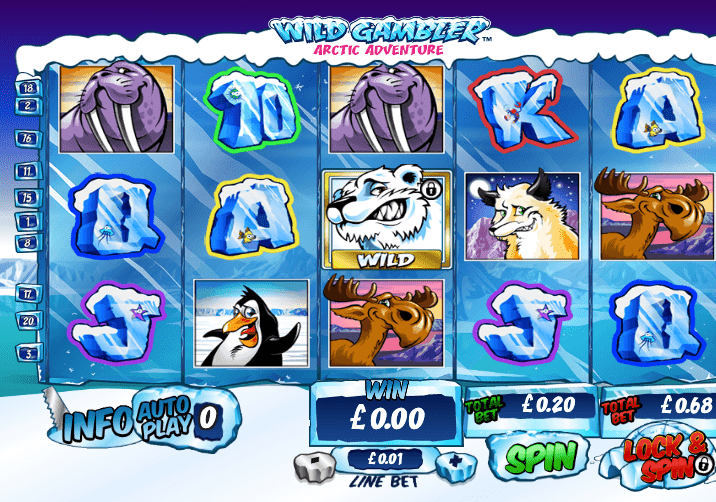 In the first Wild Gambler game, players were taken to the African Savannah, but in the second instalment, it’s the Arctic that they get to explore. Indeed, in this cartoon-like video slot, you’ll come face to face with some of the wildlife that inhabits the frozen continent, including walruses, polar bears and penguins.

As a video slot, Wild Gambler 2 by PlayTech has five reels, three rows, 20 pay lines and an RTP of 96%. It also has some great extras. The polar bear, for example, works as the Wild Symbol and can substitute all other symbols bar the Scatter. Getting five Wild Symbols gives you an incredible 1,000 coins. 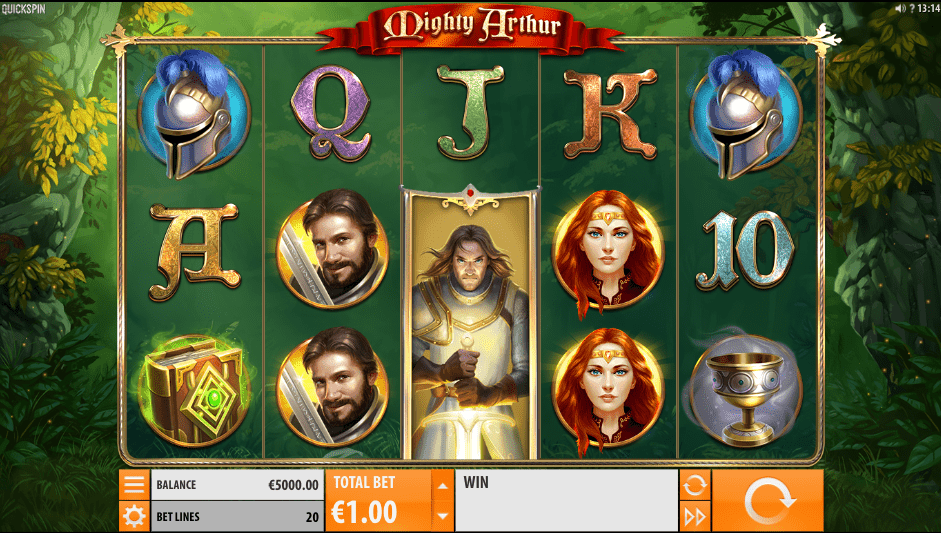 As you may have guessed from the game’s title, this video slot by Quickspin is based on the story of King Arthur and the sword in the stone. So, if you’re a fan of fairy tales and medieval legends, you’ll be sure to love it.

With its five reels and 20 fixed pay lines, the game has an RTP of 96.94%. The highest-value symbols are the cup, the spell book and King Arthur, while the card suite symbols are the lowest. While playing, it’s good to remember that the Wild Symbol can substitute any and all other symbols bar the Bonus one. 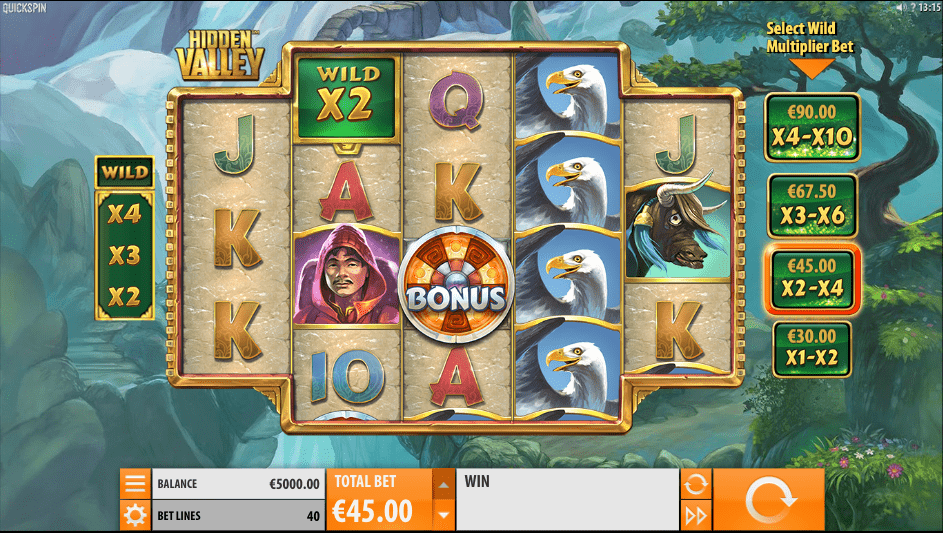 Head to Asia in this Quickspin title that sees two adventurers unearth the secret entrance to a valley in the Himalayas, which was described in the mythical tale of Shangri-La. But you need to be ready for some surprises, starting from its layout.

Hidden Valley has 40 pay lines and five reels, with the first and last reels having three rows with three symbols, and the remaining three having four rows and symbols. There are also free spins, which are triggered when you get a minimum of three bonus Scatter Symbols anywhere on the reels. 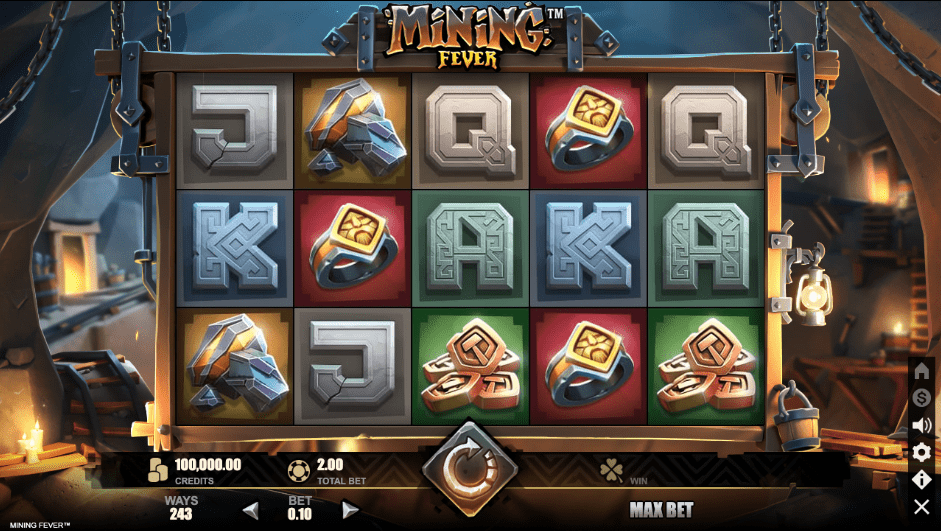 Are you ready to dig for gold? Set deep beneath the surface of the Earth, Mining Fever by RabCat Gambling & Microgaming will see you following three dwarves as they mine for gold. And each character has their own mini feature that gives you either free spins or matching symbols.

The game has five reels and provides you with 243 ways to win. Meanwhile, landing three Scatter Symbols in this game gives you free spins during which Wild Symbols will move around, giving you the chance for even bigger wins.

What are Adventure Slots?

Many may think of video slots as being digital versions of the traditional fruity machines, which are characterised by the cherry, lemon and card suite symbols. But the advent of the video slot has also brought with it a whole new world of opportunity for developers to create games that come complete with, well, adventures! And that’s where adventure slots come in.

Often based on a journey that is undertaken by the main character in the game along with the player, adventure slots can feature fantastical worlds where magic reigns, ancient empires where legends are true, and far away universes where battles are taking place. In other words, adventure slots are games that go over and above the ‘simple’ mechanism of the game and which bring theme, storyline, graphics and sounds together to transport the player into a whole new world.

Is the fact that they’re great fun not enough? But, joking aside, there are many reasons why you should play adventure slots. For a start, many of them are really well designed, with superb graphics, fabulous soundtracks and super-awesome themes. Secondly, since so many people love them, many developers from across the globe continue to create new titles on a yearly basis, which means you have a practically endless array of themes to choose from. Thirdly, in a bid to get players to play their particular slot, many developers give these adventure slots loads of in-game bonus features, really good RTPs (Return to Player), and even great pay outs. Oh, and many of these adventure slots are optimised for mobile screens, so you can play them whenever you want, wherever you are!

While many people look to play adventure slots for real money, there can be a lot of thrill in playing online video slot games for free. Indeed, playing adventure slots without staking any money can be a super fun way to while away the time, not to mention a wise way to learn the ropes and to understand the video slot’s pay table.

So, if you’re looking to do just that, here’s what you need to do:

The majority of online casinos in Europe allow players to play free demos of all their games without the need to register or input any of their credit or debit card details. For players from the United Kingdom, however, a recent change in the law means that you have to register even if they want to play for free. This law is mainly in place to protect minors and excessive gamblers, so such a registration should be easy, free and safe. Unfortunately, US-based players have it a little harder, as not all the games mentioned here can be played at US online casinos and not all States allow citizens to play casino games online.

Apart from the ones mentioned on this page, there are loads of internationally renowned developers that have created adventure slots you can play. Indeed, if the games we mentioned in this article aren’t to your fancy, you could also try playing Pyramid King by Pragmatic Play, 300 Shields Extreme by NextGen Gaming, or Fantasy Forest by RabCat Gambling, to mention but a few.

If you’re looking for other types of slots, or for a specific type of adventure slot, there are many other categories you can choose from including pirate slots, Egyptian themed slots, Aztec slots, moustache slots, Wild West slots, Viking slots and much, much more!

Adventure slots is a category that is basically made up of any video slots that take you on a journey through a particular world, be it through nature, ancient worlds or even outer space. A number of adventure slots are based on movies or well-known legends, as well as on character reminiscent of famous ones (like Indiana Jones, Tutankhamun or Nikola Tesla).

Well, for a start, they’re great fun to play thanks to their themes. But, more than that, seeing as so many developers from around the world have adventure slots in their portfolio, each of them tries to outdo the others by making theirs better. Adventure slots also tend to have more in-game extras

It’s generally assumed that Ugga Bugga by PlayTech, which was released in 2006, has the highest RTP of any video slot. This stands at 99.07%. Since Ugga Bugga is also considered to be an adventure slot, then there you have your answer. But it’s also good to remember that the majority of slots (adventure-themed or not) have an average RTP of 96%, so it’s always quite high no matter which slot you choose to play.

This depends entirely on your online casino of choice, but the majority of casinos have many bonuses for both new and existing players. This means that, yes, you will still get an adventure slot bonus at most casinos. These bonuses can include sign-up bonuses, free spins and no-deposit bonuses, among others.

Yes, the majority of video slot providers include adventure slots jackpots in their software. This includes Yggdrasil Gaming, whose Jackpot Express video slot has some pretty neat jackpots.

Really easily if you’re from Europe, actually! All you have to do is to head to your favourite online casino, where you can play demo versions of the majority of the games without the need to sign up or register. Players hailing from the UK, meanwhile, can do the same but the law requires them to register (for free) before doing so. US players are a lot more limited in this regard, but some developers do give you the chance to play demo versions of their slots for free directly on their site