Blueprint Gaming is among the best-known casino game providers in the world, with many Blueprint slots having already reached classic or iconic status. But what makes these games so good? We look into all of this in our article below.

Who Are Blueprint Gaming?

Blueprint Gaming is a world-leading, UK-based game developer that was founded in 2001. Following years of working on games for betting shops, arcades, and pubs, the company shifted its attention to online gambling and was snatched up by Gauselmann Group – a German company that has been in the gaming industry for over 50 years.

Since then, Blueprint has bolstered its presence both online and at land-based casinos. In fact, today, Blueprint slots can be found at over 100,000 gaming terminals in the UK, Germany and Italy, and online casinos worldwide.

Blueprint Gaming is committed to releasing around 20 new titles per year, and has become the leading developer of slots built with the Megaways™ mechanic. The latter was developed by Big Time Gaming with the aim of increasing winning combinations and ways to win for players.

With so many Blueprint slots out there, it’s incredibly hard to pick a handful. But that is our job, which is why we’ve been through many of their video slot titles to bring you five of the most enticing and exiting servings by this developer. 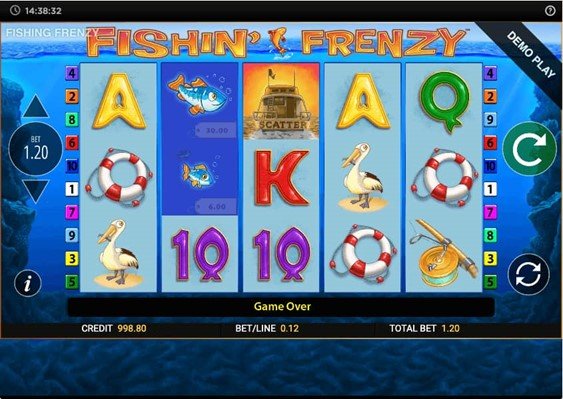 Although the original Fishin’ Frenzy video slot is set on a standard five-reel, three-row grid, it has become a classic thanks to its vivid graphics and many bonus features.

In fact, this fishing-themed game released in 2014 has free spins, a Wild Symbol, and a max win of 5,000x your stake.

This game, which has an RTP of 96.12% and high volatility, has spawned many sequels including Fishin’ Frenzy: The Big Catch and Fishin’ Frenzy Megaways™ – the latter of which is part of the Jackpot King series, where players can win insane pooled jackpots. 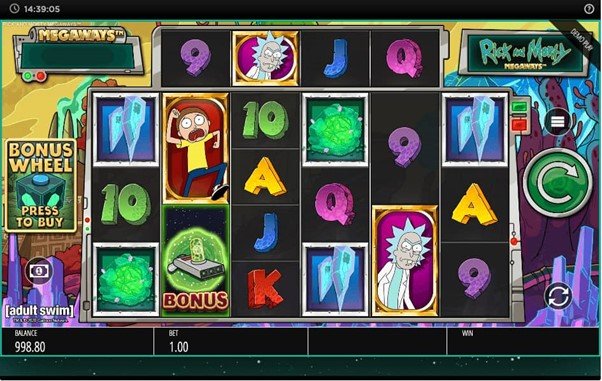 Based on the hit Network adult-animation sitcom, Rick and Morty Megaways™ has been a runaway success for Blueprint. That can be partly attributed to how well the developer has managed to capture the spirit of the show, and partly due to the amazing features that include Cascading Reels, a Mystery Symbol, and multiple free spins features.

The game has an RTP of 96.55% (which goes up to 97.05% during some rounds), high volatility, and the standard 117,649 ways to win. Blueprint has also recently released Rick and Morty Wubba Lubba Dub Dub!!, a traditional video slot with more features than we ever thought possible and a max win of 50,000x your stake. 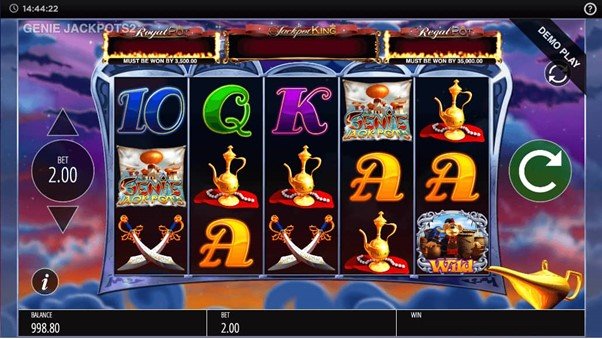 This Arabian genie-themed slot is one you’ll come across at many of the best Blueprint casinos, and it’s easy to see why once you take it for a spin. With an RTP of 96.54% and medium volatility, this game is played out on a five-reel, 20-payline grid that comes to life with beautiful animations and graphics.

It’s also chock-a-block with features that include a Wild Symbol, a Mystery Win, and a Magic Carpet and a Three Wishes Power Spins features. Oh, and it also has a 10,000x your stake max win. 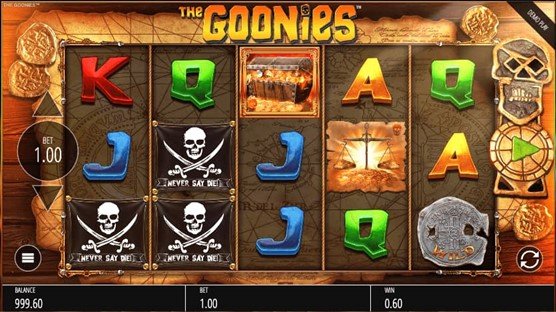 It is practically unheard-of for a review to have a top list of Blueprint Gaming slots and not include the developer’s iconic take on the 1985-film with a story penned by Steven Spielberg.

In fact, The Goonies video slot has become a flagship product for the company. The game itself is a five-reel, 20-fixed-payline slot with 96% RTP and high volatility.

It also comes with plenty of bonus features including Mikey’s Hidden Treasure – which is when reels become Wild, and One-Eyed Willy Bonus Boost, which happens when an additional symbol triggers the main bonus. 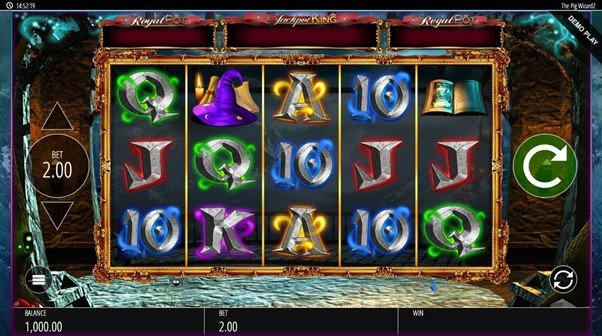 Combining a farmyard and the adventures of the most famous boy wizard of all time, The Pig Wizard is a fun video slot that doesn’t take itself too seriously. How could it, anyway?

But that doesn’t mean it’s not worth playing – in fact, the humour works in the player’s favour as on top of being super fun to play, it also comes with a whole menagerie of bonus features including a bonus game, cash prizes, free spins, and a progressive jackpot. The game has an RTP of 93.74% and a max win of 10,000x your stake.

On top of creating some of the world’s best branded video slots, the game developer has totally taken over a niche in online casino games: making exclusive Megaways™ titles for the best Blueprint casinos out there. Here’s a look at four of the best ones we’ve come across. 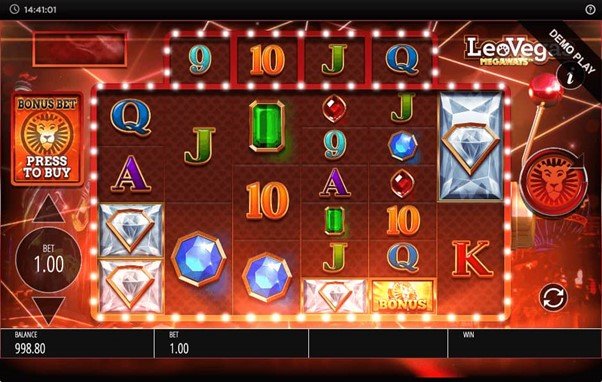 With LeoVegas’ signature hue (orange) dominating the game, this title offers users the classic 117,649 ways to win which Megaways™ slots are so famous for. The game, which has an RTP of 96.5%, comes with free spins, Cascading Reels, the Bonus-Buy Button, the Minimum Megaways™ Wheel, and a 50,000x your stake max win. 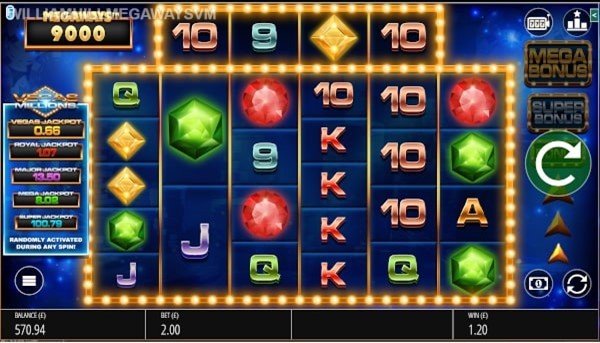 Cascading Reels, a Mystery Symbol, free spins, a bonus game: there are very few features the William Hill Megaways™ video slot doesn’t have. It also comes with an RTP of 95.99% and a max win of up to 50,000x your stake! 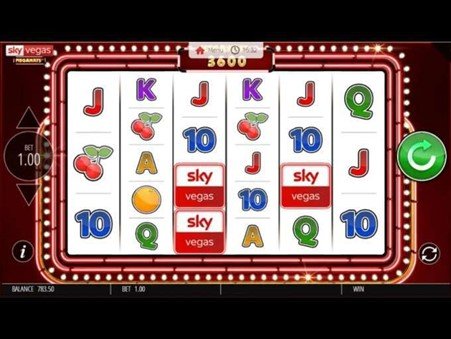 Channelling the traditional fruit machines, Sky Vegas Megaways™ is a beautifully-rendered video slot with medium-to-high volatility and an RTP of 96.5%. Features here include Cascading Reels, free spins, and a 10,000x your stake max win.

As we’ve mentioned before, Blueprint slots are full of features that truly set them apart from those of the developer’s competitors. Below we take a look at what you can expect to find when playing Blueprint Gaming slots.

One thing Blueprint has become known for over the years are their branded slots, which range from those based on famous TV shows and cartoons like the Inspector Gadget video slot, to those recreating the mood of major Hollywood blockbusters like Ted Megaways™. But it doesn’t stop there.

Blueprint are also great at capturing the spirit of the themes they base their video slots on – all you have to do is check out titles like Vikings Unleashed Megaways™, Eye of Horus, and Primal Megaways™ to see how the Viking, Ancient-Egyptian, and pre-historic themes have been so well represented.

Many of this developer’s slots come with a wide array of in-game bonuses and features. These can include Wild Symbols that replace most other symbols on the game’s paytable, as well as Scatter symbols that award you a number of free spins.

But over the past few years, Blueprint has sought to create even more fantastic features. In The Pig Wizard, for example, you can unlock a bonus game where you travel across a Magic Map; while in Count Duckula, tombstones and picture frames hold the key to two different bonus rounds that could see you win cash prizes or unlock a separate grid with even bigger prizes.

Blueprint Megaways™ slots are by no means average. In fact, in many of its Megaways™ titles, Blueprint has included Cascading Reels, free spins (sometimes with unlimited multipliers), Wild Symbols, Scatter Symbols, and the Feature Buy Button. The latter feature allows players to buy their way into the free spins section and give themselves a better chance at winning large sums, which in a game like Gorilla Gold Megaways™, is an amazing 20,000x your stake. Blueprint, however, is also the company that first brought the Megaways™ mechanic and the progressive jackpot together – thanks to the Jackpot King Network, which we explore below.

When playing the top Blueprint Gaming slots, you may come across ‘Jackpot King’ versions – so you may obviously ask yourself what that is all about. Well, in a nutshell, the Jackpot King Network is a network created by Blueprint, where a number of games feed into a central jackpot through players’ stakes. Players that play games that form part of this network can then win huge cash prizes even when staking a small amount of money.

There are dozens of Blueprint titles that form part of this network, including Worms Reloaded, The Goonies Jackpot King, Ted Jackpot King, Slots O’Gold Megaways™, and Irish Riches Megaways™.

Practically all online casino sites in Europe, the UK, and further afield now have a strong mobile casino presence, with their sites being created with responsiveness in mind so they can resize to fit on any screen. Moreover, many of the best Blueprint casinos have also created dedicated casino apps that you can download either via the official website, or else through the App Store or Google Play. In other words, if your smart mobile device runs HTML5 (which most phones do), then you can easily access Blueprint slots and dedicated apps.

Needless to say, we always check that the casinos we recommend can be accessed on iPhones, Android phones, iPads, and Android tablets, so you should have absolutely no trouble playing them there.

How Do Blueprint Slots Compare to Competitors?

Blueprint Gaming is one of the world’s leading developers of video and Megaways™ slots. Indeed, its titles come in a wide variety of themes, have a large myriad of features, and support 18 languages and 30 currencies. So, when it comes to comparing, Blueprint slots are certainly at the top of the pyramid.

Safety and Security at the Top Blueprint Casino Sites

Keeping yourself safe when playing any casino game at any casino site is crucial, especially since you’ll be divulging personal and banking information, as well as entrusting the casino and the game developers to keep things fair when you’re spending your hard-earned cash to play.

Blueprint Gaming knows this all too well, and it has managed to garner licences from three of the world’s most respected iGaming jurisdictions: one from the United Kingdom Gambling Commission, another from the Alderney Gambling Control Commission, and the last by the Malta Gaming Authority. These licences hold the game developer to strict standards when it comes to the random number generator (RNG) that operates the game, which ultimately keeps things fair for you.

Another thing to keep in mind is that the top Blueprint casinos can not and do not manipulate the games once they receive them, so no matter where you play these games, you will always have the same chances of winning.

Playing Blueprint slots demos is particularly easy if you’re in Europe or the UK.

As always, do keep in mind that you cannot win real money through Blueprint slots free play, or any other game developer’s slot demos.

Blueprint Gaming is certainly among the industry’s best providers of slots and Megaways™ – both in terms of creativity and in terms of security. In fact, we’re sure you’ll love them as much as we do once you give one of their titles a shot!

Many of the top European and UK casinos stock Blueprint slots. Our favourites are Videoslots, Casumo, Betsson, and Dream Vegas.

Blueprint Gaming has an enviable portfolio made up of beautiful games in a variety of themes and with great features. Their games also support 18 languages and 30 different currencies.

Yes, Blueprint Gaming has invested a lot of time and money into their licensing and reputation, thus making their games absolutely safe.

The highest RTP for a Blueprint Gaming slot we found is that for Primal, which stands at 96.76%. Nevertheless, during the bonus round of Rick and Morty Megaways™, the RTP goes from 96.55% to 97.05%.

Yes! In fact, Blueprint has created the Jackpot King Network, which unites many of its progressive jackpot games to give users an even bigger potential prize.

Yes, casinos will still give you their usual bonuses if you opt to play Blueprint slots (unless they state otherwise in their T&Cs).

Totally. You can make use of this feature easily on sites like this or else directly at online casinos.