Play'n GO slots are known to be some of the most engaging casino games on the market. This innovative software provider has developed a wide range of exciting slots in the past two decades for players to enjoy.

Top Play’n GO Slots and Where to Play Them

Charlie Chance in Hell to Play

Play’n GO has been producing award-winning casino games for over 20 years. Although high-end mobile slots are the company’s specialty, they also produce a wide range of other casino games, including video bingo and classic table games.

Read on to learn a little bit more about the company, their history and what you can expect from their slot games.

Launched in 1997 by a self-described “group of computer geeks”, Play’n GO is a Swedish company whose mission is to be the best casino games supplier, while inspiring and delighting those who play their games.

Play’n GO are known for their innovation – they were one of the first casino software developers to introduce a recurring character into their slots, Rich Wilde. He and other such characters help create engaging storylines that are always compelling, whether based on an adventure theme, the Wild West or fantasy.

Their games always feature high-quality graphics and sounds for both mobile and desktop. Another great thing about Play’n GO slots are their in-game features, such as Wilds and Scatters, multipliers and free spins.

Like any good casino games supplier, this developer has something for everyone. You will find just as many high-variance slots as low variance in the Play’n GO slots library.

The RTP value of any slot game is actually quite important to keep in mind, since it refers to the theoretical amount paid out by the game. If a slot has an RTP of 97% and it takes in 100 coins, then in theory, over an infinite period of time, it will pay 97 of those coins back to players, keeping just three for itself.

Stuck for choice? We've already listed the best Play'n Go slot for you so that you can start playing straight away.

The Rich Wilde series of games are undoubtedly some of the best Play’n GO slots, nicely illustrating just how innovative this company is. Introducing a regular character and a storyline to a slots collection was unusual at the time, but the move has paid off in the form of a highly successful franchise.

In addition to the hugely popular Book of Dead, Rich Wilde also appears in a number of other slot games, so be sure to keep an eye out for the below:

Released back in 2012, Rich Wilde and the Aztec Idols is a high-volatility, 5-reel slot. This is the game that introduced players to Rich Wilde, and sees our hero on a treasure hunt in the South American jungle.

This 2019 release is available at many of the best Play'n GO casinos. This time, the protagonist finds himself on a quest to discover the secrets of the Cult of Cthulhu in the dark, mystical setting of ancient Aztecs. Rich Wilde and the Tome of Madness is a highly volatile slot game, with cascading reels and a Mega Wild to multiply your wins.

Rich Wilde returns for another exciting adventure, this time around grappling with his past adventures. Released in 2021, the 5-reel Rich Wilde and the Amulet of Dead is also considered a highly volatile game, with lots of free spins granted by the pendant-shaped Scatter symbol.

The sequel to the 2020 release Rabbit Hole Riches, Play'n GO takes us back to Wonderland with Court of Hearts. The story revolves around the Jack of Hearts, who finds himself charged with a crime that he didn’t commit – it’s your job to help him clear his name.

This 5-reel, high-volatility slot features 10 fixed paylines, as well as a whole host of familiar characters. The likes of the Caterpillar, the Dormouse and the Cheshire Cat all line up alongside the Queen of Hearts, taking you on a fantastic adventure through Wonderland.

#3 Charlie Chance in Hell To Pay 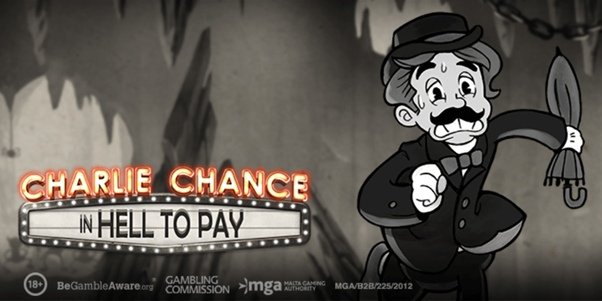 Inspired by early animations and the Charlie Chaplin movies, Charlie Chance in Hell To Pay has a retro feel to it. Along with the classic Bell and Bar symbols, the reels also feature other typical graphics seen on fruit machines in days of old. The 666 symbol is a hellish reworking of the traditional 777 symbol seen on older slots.

Played on a 3×3 grid, this unique Play'n GO release sees our hero landing himself in serious trouble, needing to outwit the devil in order to escape the depths of hell and win a fortune.

Much like its prequel Reactoonz, this Play'n GO title features cartoonish aliens descending on Earth from outer space. Reactoonz 2 features familiar characters from the previous game, which was incidentally one of Play'n GO’s most popular titles. But it also introduces the lovable Energoonz, distant cousins of the Reactoonz characters.

Remove clusters of symbols from the 7×7 grid to charge the Quantumeter and release one of four levels of bonus features. The higher the level, the more Energoon wilds you’ll achieve. If you can reach level four, then you’ll achieve a 2x multiplier.

Featuring Robin Hood and other familiar characters, including Little John, Friar Tuck and Maid Marian, Riches of Robin is a very high-volatility slot. The game features 20 paylines and is played on a 5×3 grid.

Join the band of Merry Men for an adventure through Sherwood Forest, committing heists and collecting money bags along the way. Will you be lucky enough to earn the Riches of Robin?

Play’n GO may be well-known for producing slots, but they also have a range of other games, available for both desktop and mobile casinos. Let’s take a look at their product range in a little more detail.

Among the wide range of Play’n GO slots, you will find several that feature a progressive jackpot. These games offer players to win huge, potentially life-changing jackpots.

A good example would be Fruit Bonanza (93.05% RTP), a progressive jackpot game based on traditional, fruit-themed slots.

Play’n GO offers a number of keno-style games, known as video bingo. Popular titles such as Sweet Alchemy Bingo (97.57% RTP) and Rainforest Magic Bingo (97.38% RTP) allow players the chance to play up to four cards at once, each with 15 numbers.

The game will randomly select 30 balls from a total of 90, and as the player marks their card, patterns will be formed. The prizes won depend entirely on these patterns. For example, in Super Bola Bingo, spelling out the title of the game earns players 1,000 times their total stake.

There are several online casino table games to be found in the catalogue of Play’n GO games. Classic casino games such as blackjack, roulette, Texas Hold’em poker and baccarat all form a part of this software developer’s catalogue.

Absolutely. All Play’n GO casino games are tested and certified by an independent gaming lab before release to prove that they are truly random. BMM Testlabs, the most experienced independent testing laboratory in the world, is the developer's preferred choice.

The bonuses on offer at the best Play’n GO casinos are in line with what you’d expect from any reputable casino. Here are some of the most common examples.

One of the great strengths of Play'n GO is their expertise in developing casino games for mobile and tablet devices. So it’s no surprise that Play'n GO slots are some of the most popular games among fans of mobile casino sites and gambling apps.

However, it’s not only mobile slots in which they excel, as many of their other products have proved popular too. In 2019, they were named the EGR B2B Mobile Supplier of the Year, which underlined their position as the leading developer of mobile casino games.

Play’n GO slots are some of the most popular games found at online casinos today. With colourful characters, engaging stories and quality sounds and graphics, it’s easy to see why.

The developer is thought to be one of the best casino suppliers in the world, entertaining and rewarding players with a massive library of titles. Give their games a try by registering at one of our recommended Play’n GO casinos today!

A leading supplier of slots and other casino games, Play'n GO is an award-winning Swedish software development company. They specialise in developing high-performing casino games for mobile devices.

When choosing casino games, RTP is an important factor. The Play'n GO slots with the highest RTP rates are Rage to Riches (97.12%) and Piggy Bank (97.03%).

Many online casinos offer players the chance to enjoy free slots, including Play'n GO games. Playing at free play casinos is a great way to learn the rules if you are new to a game.

The Rich Wilde slots, such as Book of Dead and Aztec Idols, are the most popular Play'n GO games. Outside of that particular series, their Legacy of Egypt slot won the AskGamblers Slot of the Year award in 2019.

Everyone will have a different opinion, but any Play'n GO casino recommended on this page would be a great place to start. Casino Cruise is an example of a safe and secure casino that offers new players a generous welcome bonus for Play’n GO slot games.

Yes! Many online casinos offer welcome bonuses that include free spins on Play'n Go slots. One such example is Twin Casino, who currently include 400 free spins on Book of Dead as part of their welcome offer.

Absolutely not! All Play'n GO slots online have been independently verified for fairness by a gaming software testing lab before being released. Play’n GO uses BMM Testlabs, one of the oldest testing agencies in the world.

Not only do the Rich Wilde series of slots have engaging plot lines, but they are often subject to free spins bonuses. They also tend to be highly volatile, offering payouts that are larger than average.