The Best Thunderkick Slots and Best Casinos to Play in 2021

There are plenty of reasons to love Thunderkick slots and the online casinos that offer them to players! In this article, we take a look at what makes a good Thunderkick Gaming operator, and what you should be looking out for when searching for the best Thunderkick slots online.

Thunderkick is are a games supplier who create slots for the online casino industry. They are based in Malta, though also maintain offices in Stockholm, Sweden. The company started in 2012, when a group of NetEnt developers broke away to create a new gaming platform which would feature new slots that were designed to provide an even more fun and immersive experience. By implementing their Remote Gaming Server, they are able to operate as an independent games developer while also allowing all their development work to be done in-house.

Birds on a Wire

Though some other software providers may offer more games, the slots for Thunderkick casinos all are quality products. From the moment you begin playing, you’ll see that a huge amount of thought and effort has been put into the game’s design and gameplay strategies. All Thunderkick slots allow the player to choose the soundtrack, be it the entire background music or simply the winning sounds.

You can also customise the playing speed to suit your playing style. The majority of Thunderkick slots offer a simple 3-row and 5-reel setup, with the number of paylines normally between 10 to 25. 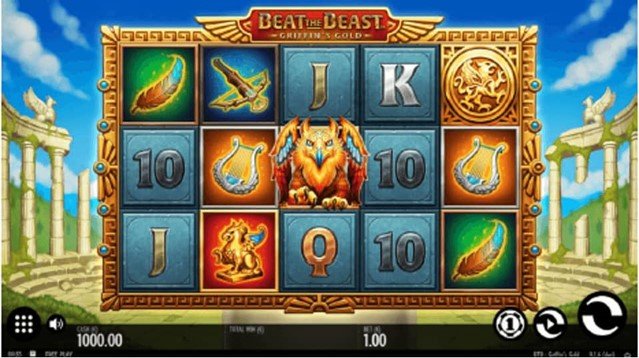 This is the fifth and final game in Thunderkick’s Beat the Beast series. It’s a highly volatile game, including a surprise in the form of a 22,222x multiplier. As it is the case for most of the Thunderkick slots machines, it features 5 reels with 3 rows and 9 paylines. The RTP is a promising 96.14% and the game pays from left to right.

Griffin’s Gold really kicks off once you activate the bonus game, which can be triggered by catching 3 or more scatter wilds. Now, if you manage to get 3 Roaming Wild symbols across the reels together, then there’s a massive 125x multiplier waiting for you. But you can up the ante with a 22,222x multiplier if you’re lucky while still playing the bonus game. 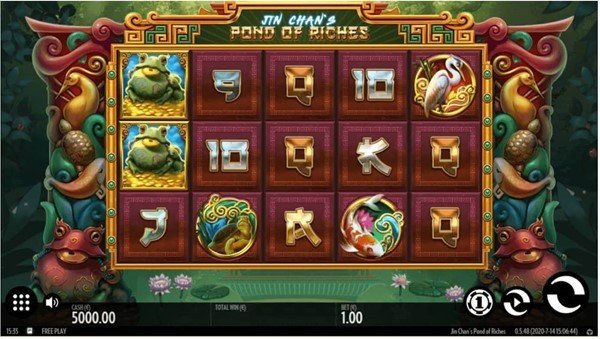 As the game’s name suggests, this is an East-Asian-themed game (Jin Chan translates as “money toad” according to ancient Chinese folklore). To that end, the game’s design includes the symbols of herons, koi carp and turtles. The five reels are situated in a pagoda-style building surrounded by the ornate carving of wooden animals, and there are 3 rows and 15 paylines.

It’s true that the RTP is a little on the low side at 94.27%, but this Thunderkick game still has lots to offer. Landing the 3, 4 or 5 scatters will activate the bonus game, which gives you the chance of getting the 120x multiplier. Finally, we should mention the Sticky Respin feature, in which winning combinations are held as the other positions spin again. 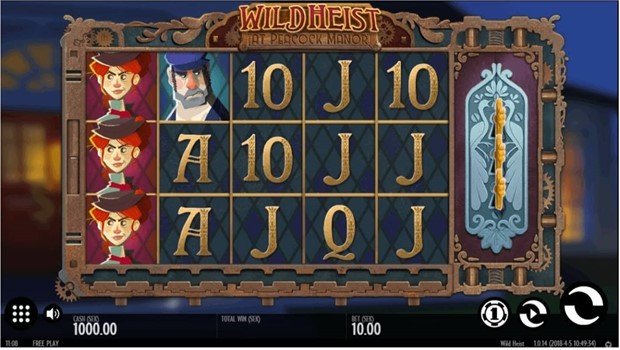 This is an exciting Victorian era narrative-based slots game. Your job is to help thieves steal a golden peacock by collecting the keys to open the manor house’s entrance. This high-volatility Thunderkick slot has a very respectable RTP of 96.1%, and features 5 reels, 3 rows and 17 paylines. By playing with the maximum bet of £100, there's a chance to win almost 8,500x your stake. Also, if you happen to land 5 wilds, then you’ll immediately receive 20x your initial bet.

Free spins are awarded in the main game thanks to different mystery features: wild reels, random wilds and walking wilds. Once in the bonus game, the free spins can be enhanced by your picks on the pick screen and these will, in turn, determine the type of free spins you’ll receive. 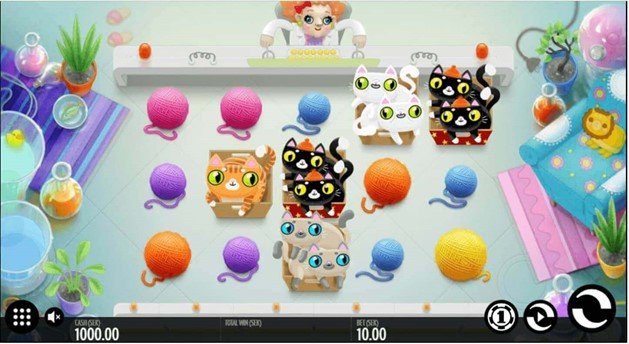 Though kitten-themed slots are very popular with players, we don’t get to see so many of them. Having said that, there are no furry bundles of joy here, as these weird kittens are somewhat more akin to Japanese kawaii or anime. Not Enough Kittens also features a professor, Caterina Kettingur, who’s the head of science in the P.U.S.S. facility. From the super creative theme to the whacky design, this slot title is one of the best Thunderkick games out there. There are the usual 5 reels across 3 rows, but also an amazing 35 paylines, along with a maximum win of 3,650x your stake.

The RTP is a reasonable 96.1% and the variance is medium. This quirky game uses differently coloured kittens as the highest-paying symbols, with any of these appearing in cardboard boxes. Though there are many opportunities to win in the base game, it’s only by getting to the bonus rounds where things really start to come alive. Here, you can win 25 free spins or more. During these free spins, all the wilds get stacked together. This will increase your chances of scoring some big prizes. 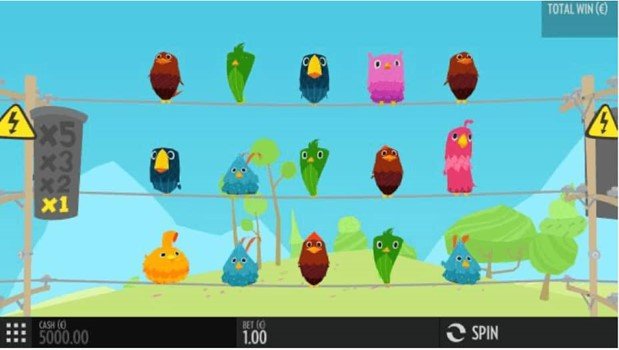 Yet another quirky yet highly volatile game for Thunderkick casinos, Birds on a Wire has certainly proved to be one of their most popular games with players from all over the world. There are none of the traditional reels we’re used to seeing among the best Thunderkick games, but this slot features 3 electric wires, with 5 cheerful birds sitting on each. This gives us the familiar 5 x 3 layout. There are 17 fixed paylines, which by anyone's standards is a lot. The RTP is pretty high at 97.2%, though with maximum bets you can hit a payout of 20,000x your initial wager.

All the symbols are “cascading”, meaning that as symbols disappear, others fall to replace them. For example, after receiving an electric shock, birds will disappear only to be replaced by others. If you can collect 3x cat symbols, then the free spins bonus will launch. Starting with just 10 free rounds, you can collect more cats to reach a maximum of 34 free spins in one round.

Thanks to Thunderkick being licensed in both the UK and Malta, you'll find all their slots available across many UK-based online casinos and thousands of casino gambling sites all over the world. That said, their policy is quality over quantity, so you’ll find there's no lazy re-skinning of previous games.

Thunderkick have chosen to stay well away from any branded licensing agreements, meaning no superheroes or movie tie-ins. All their slots are totally original, with attractive designs and graphics as well as some great soundtracks.

All online casinos which host Thunderkick games are reputable and have stellar reputations for fairness, along with offering generous and exciting bonuses and incentives.

The average RTP across the Thunderkick games catalogue is 96.2%. But if you’re looking for a slot with higher payout rates, then they have a number of exceptions to keep you happy. If you’re looking for the highest RTP, then 1429 Uncharted Seas gives an amazing RTP of 98.56%. In theory this means that, for every £100 you spend, you’ll receive £98.60 back.

For low-stakes players, the minimum bet is just £0.10, while high rollers are afforded a maximum bet of £100. Many Thunderkick slots also offer multiple winning paylines, with some like the “Pink Elephants” game going as high as 4,096 ways to win.

Although Thunderkick have not produced any games with progressive jackpots, this shouldn’t put you off, as the studio does have games with high volatility and high RTPs.

All online Thunderkick casinos that have partnered with this software provider will offer any number of incentives to attract new players. These can range from welcome bonuses to free spins. In fact, many casinos will offer the latter, ranging from 25 to 50 free spins. As always, we strongly suggest that you take a minute to read the terms and conditions before you play with any bonus.

Being able to take a game for a “test drive” is a great idea as it allows you to try out all the features and become comfortable with the gameplay before you start spending any of your own cash.

UK players should be aware that due to new restrictions by the UK Gambling Commission, all players looking for free play will first have to register at the online casino of their choice and provide verification. In some ways, this shouldn't be a problem as most casinos will require the same proof of identity before they pay out any winnings.

All Thunderkick slots have been expressly designed to give mobile players the best online experience, with super-fast loading times, an easy-to-navigate interface and smooth gameplay. Using Flash and HTM5, along with their Remote Gaming Server, all games work seamlessly on all portable devices, whether iOS or Android, as well as all desktops.

As a games provider, Thunderkick doesn’t offer much information with regards to their own customer support, apart from an email address. If you have any issues or queries whilst playing one of their slots at any online Thunderkick casinos, then it’s the casino's customer support you should contact. Most reputable casinos will offer 24/7 customer service, and often in a number of different languages.

The Pros and Cons of Thunderkick Slots

The advantages of playing Thunderkick slots will become obvious to you the minute you start to play. However, these games do have their fair share of shortcomings too. Below, we've compiled a list of their strengths and weaknesses.

Since 2012, Thunderkick has released some of the best slots in the industry. Their library of over 40 games exhibits extremely high quality, and it’s no surprise to find so many online casinos clamouring for their stylish, and yet instantly recognisable games.

The answer is subjective. All Thunderkick slots are beautifully designed, with many modern and sleek elements that make them both immersive and great fun. To find the perfect game for you, we recommend you to check out our list of the best Thunderkick games above.

Any of the casinos listed in the table above will offer an exceptional playing experience with Thunderkick slots. They also have great welcome bonuses as well as a host of other features to keep players immersed and entertained.

Unfortunately, there are no progressive jackpots with Thunderkick slots, but their games still offer some great prizes along with many casino bonuses.

Beat The Beast – Griffin’s Gold offers an astounding payout of 22,222x your stake!

Absolutely! Thunderkick have a stellar reputation and are licensed by the UK Gambling Commission and The Malta Gaming Authority. As a result, all games are regularly audited to ensure they remain both fair and random.

Check out the table above to see detailed Thunderkick RTP rates on some of their most popular slots. On average, the RTP stands at 96.2%.

All the top online casinos that host Thunderkick games will offer a free play option.

No, they don’t. Thunderkick are a provider of online slots to other casinos.