Do you want to play the best Endorphina slots for real money? We have you covered with our list of tried-and-tested, regulated Endorphina casinos online!

Endorphina is a relatively new company in the iGaming business and, while it’s been operational since 2010, it’s only since 2014 that it really kicked off. This means that its portfolio is not huge – you’re looking at around 79 titles here – but they’re all well-made, with beautiful graphics, great sounds and fabulous themes. The latter plays a very important role in Endorphina’s philosophy, in fact … As the company itself states on its website, they do their best to take an ‘empathetic approach’ to their games by listening to players’ needs, as well as unique cultural points.

Since the very beginning, Endorphina slots have been created using Flash, and this means that players can play the company’s games at both desktop and mobile casinos without the need to download any additional apps. Now, with the rise of HTML5 as the preferred software for creating online casino games, the company is also creating HTML5 versions of its games.

Moreover, all of Endorphina’s games were ‘thoroughly tested’ by Gaming Laboratory International. This world-renowned and well-respected testing company has assured users that the games’ Random Number Generator (RNG) and their Return to Player (RTP) work well and is fair.

Before we move on, however, we’d also like to point out that a number of websites online mention that Endorphina slots are sometimes found on online casino sites which are unlicensed or illegitimate. While we couldn’t confirm this, we can vouch that the Endorphina casinos mentioned on this site are licensed and regulated, and have all the measures in place to protect you, your money, your rights and your data.

Endorphina Special Features & How They Integrate into Casinos

Because the Endorphina team works on just two handfuls of games per year, their titles are always particularly striking – especially when it comes to visuals and audio. This is one thing that makes its video slots stand out from that of its competitors. Moreover, their games are jam-packed with extra bonus features including wild symbols, multipliers, scatter symbols, bonus games and much more.

You’ll also have no problem playing Endorphina Slots online because, as mentioned before, Endorphina use Flash to create their games. This means that you can just sit at your desktop computer or grab your mobile phone and play them directly from your browser.

One final point with differentiates Endorphina Slots from that of other competitors is that all its games have a set RTP of 96%. This means that no matter which Endorphina slots title you choose to play, you always have the same chances of winning against the casino.

Having said all this, a number of Endorphina games reviews do point out that Endorphina slots are not as impressive as those by NetEnt, Pragmatic Play, Red Tiger, Wazdan and so on. In our opinion, Endorphina games are still fun to play, albeit their relatively simple functionality.

Advantages and Disadvantages of Endorphina Games

When it comes to the best Endorphina Slots out there, the below are the ones with the best reviews. Even so, with over 79 titles already in its portfolio and 12 new titles being developed each year, there’s more for to choose from if these don’t tickle your fancy. 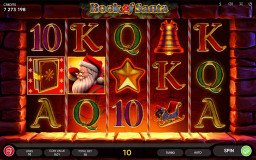 As the name suggests, Christmas is the central theme of this 10-line, five-reel, three-row video slot. In the game, sleighs, bells, stars and Santa himself make an appearance as the main symbols, along with the traditional playing card symbols, like the Ace and the Jack. When playing, it’s three Scatter symbols (the Book of Santa itself) that open up the free games for you. Moreover, the game has an expanding symbol, which is selected at random at the beginning to the game. Book of Santa’s RTP stands at 96%. 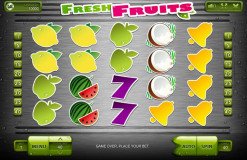 This video slot has no special features, but it does take the traditional slot into the video realm thanks to the 40 lines, five reels, and the scatter and wild symbols. As such, this is a wonderful game to play if you’re a novice or an old-school type. Its RTP still stands at 96%. 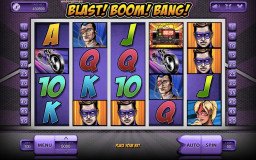 The first thing we need to mention about this comic-inspired game are its extraordinary graphics and fabulous design – you’ll be hooked from the moment you set your eyes on it. The game itself has 50 lines, five reels, Scatter and Wild symbols, and a host of free bonus games, which come together with an RTP of 96%. The one symbol to look out for, however, is the Bomb, the chosen Wild symbol. Meanwhile, getting three Scatter symbols (each of which features two superheroes in one image) is how you get your hands on the bonus free games.

This game was definitely one for the books for Endorphina: not only was it their first bitcoin slot game, but it was also the first to feature both six reels and two bonus games. The game itself, which also has an RTP of 96%, is set in a Matrix-like world, where ones and zeros dominate the story. To trigger the Trading Bonus Game you’ll need to get four bonus symbols, while to get the QWERTY Bonus Game you’ll need to get QWERTY on the reels. 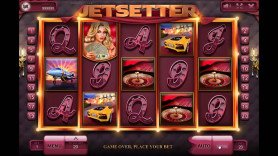 This game is one for those who love the jet-set lifestyle; you know, where you travel to your heart’s content and buy anything you want. With 20 lines, five reels, free bonus games, Multiplier, Scatter and Wild symbols, it’s one that truly gets you going. Indeed, if you get three of more Scatter symbols, you’ll get 20 free games.

On top of the in-game special features, many of the best online casinos out there give you some fabulous bonuses – whether you’re joining for the first time or a veteran. Of course, we know most people are too busy to shop around, so whether you’re looking to make your money go further with welcome bonuses, free spins or no-deposit bonuses, we’ve got you covered with our top pick of Endorphina casino bonuses.

Playing Endorphina slots for real money can be a great way of making some extra cash on the side, particularly as video slots have really high RTPs. Nevertheless, playing for free can have some great benefits, too. Firstly, it’s a sure way of getting to know the game better and understanding the paytable, Wilds and Scatter symbols, and more. Secondly, it gives you a way of evaluating whether you like the graphics, sounds and theme before you bet any real money on the game. Thirdly, it’s a ball of fun.

To try Endorphina slots for free, there are a number of things you can do. The easiest way is to head to the company’s official website, where you can play demo versions of all their games. Of course, the majority of online casinos also give players from many countries and jurisdictions the opportunity to do so for absolutely no money, without the need to even register. If you are in the UK, however, it’s good to keep in mind that a recent change in the law means that you need to register to online casinos even if you wish to play casino games for free. Signing up to these free play casinos is easy, secure and free.

Who is Endorphina – Company Overview

Endorphina is a relatively new game developer company based in Prague, the Czech Republic. Operational in the online casino industry since 2010, it has since amassed a great team of mathematicians, programmers and designers who create up to 12 new titles every year. The quality of their games stands out amongst competition and many of its titles have become really popular.

Endorphina Limited is registered in Malta, the tiny Mediterranean island nation that is a full member of the European Union. Here it is registered with the Malta Gaming Authority to provide Type 1 Gaming Services. Since this August (2020), the company is also licensed by the Romanian National Gambling Office ONJN.

The company has received numerous awards over the years. Among these are the Best Online Slot Award for the Mystery of Eldorado at the Login Casino Awards 2019, and the Reader’s Choice Slot Award for their games The Ninja and Satoshi’s Secret by Slots Guide in 2015. Other awards include Product of the Year at the Entertainment Arena Expo, and the Best Online Slot Developer of the Year by Slots Guide.

Endorphina is a Prague-based gaming development company that is renowned for its great video slots, particularly when it comes to their fabulous graphics and awesome sound. The games also have a number of in-game bonuses, including Wild and Scatter symbols, which give you more money or free spins.

Above we mention the most popular ones, as well as our favourites, however, the ‘best’ ones for you depend entirely on your taste and mood. The good thing about Endorphina slots is that they all have an RTP of 96%, meaning that no matter which one you choose, you always have the same chances of winning.

Endorphina Ltd are currently licenced in Malta and Romania.

Totally! The easiest way to do so is to head to their official website, where you can try your hand at demo versions of all their games. Alternatively, the majority of online casinos give players the chance to play their games for free without the need to register or deposit any money. UK players, however, should be aware that a recent change in the law means that they’ll need to register in order to play demos. This is completely safe and free – the measure is only in place to protect minors and excessive gamblers.