Play Free Live Casino
This website uses cookies. By continuing, you agree to our use of cookies. Find out more here.
⟨
Online CasinosPuppy Planet – NFT Pets on the ABEYCHAIN

Puppy Planet is a play-to-earn gaming platform that lets you hatch, battle, farm with, and trade NFT puppies.

In this guide, we take a look at how it works and how to play it.

What Is Puppy Planet?

Puppy Planet is the first blockchain gaming platform built on the ABEYCHAIN. It was created by Puppy NFT Labs, and is a ‘play-to-earn’ game that combines non-fungible tokens (NFTs) with decentralised finance (DeFi).

Let’s break all of that down, shall we?

Puppy Planet is a complete Digital Creatures Universe that allows users to exchange, farm, fight, and hatch their own 3D, NFT puppies.

In other words, among other things, players get to buy or sell the digital puppies, ‘mate’ with other puppies, and buy them accessories from the digital shop.

The utility token used to play this game is the Puppy Planet crypto coin, which is known as the ‘PUP token’. The company behind the game has already stated that it will release a total of 180 million of these tokens, with half of them being used for game mining.

Players will have plenty of ways to earn these tokens for themselves. These include hatching and selling the NFT pets (each of which is unique, and therefore, collectible), or by temporarily staking their tokens in a mining pool.This is why the game is referred to as a ‘play-to-earn’ game.

Of course, because Puppy Planet is held on the ABEYCHAIN ecosystem, all contracts made through it (to buy or sell the NFT pets) are done on a decentralised, double-consensus system.

How to Play to Earn in Puppy Planet

The play-to-earn feature in Puppy Planet is not as complicated as it may first appear.

So, let’s take a look at how it works.

When you have your puppy, there’s a lot you can do with it. 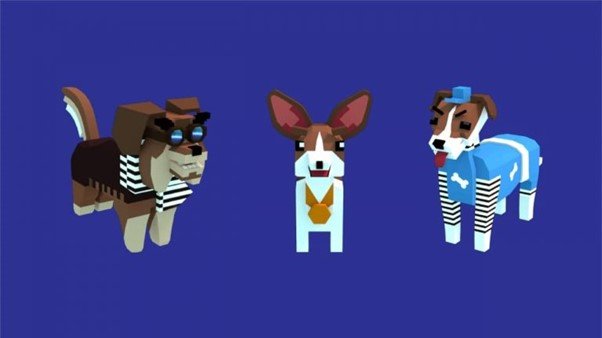 NFTs have been gaining popularity for a few years now – but what are they?

Well, the technical explanation is that they are units of data that are unique and can't be replicated.
These are usually stored on the Ethereum blockchain. In fact, while Ethereum is a cryptocurrency like Bitcoin and Litecoin, it’s also got its own blockchain, which is essentially a digital ledger used to record information, and which makes it very difficult for that information to be changed without consent.

The more fun explanation is that NFTs can be anything from a video to a GIF, or a soundbite to a virtual trading card, which the owner and the artist have rights over. These rights are verified through a unique numeric code on the blockchain.

Overview of ABEYCHAIN – the Programmable Blockchain

ABEYCHAIN is a public chain, which allows for the exchange of cryptocurrencies for goods and services, as well as for digital assets created on the same chain.

Despite being relatively new on the cryptocurrency scene, ABEYCHAIN has already proven itself to be quite a ground-breaking initiative. This is because it has managed to resolve the trilemma most blockchains presented when working with smart contracts, which were scalability, centralisation, and cost-effectiveness.

See, on the one hand, the Ethereum Blockchain is totally decentralised, but it faces scalability issues. On the other, Binance Smart Chain is highly scalable but centralised, which defeats the point of blockchain being a decentralised system.

ABEYCHAIN, meanwhile, is completely decentralised, can take on a high volume of transactions (up to 10,000 per second), and is much cheaper than other public blockchains. This makes it perfect for decentralised apps (dApps) and DeFi.

This, in fact, helped ABEYCHAIN win the 2021 Blockchain Solution of the Year Award at the AIBC Europe 2021 Awards.

Over and above this, ABEYCHAIN is considered extremely secure for smart contracts and the exchange of digital assets. This is particularly true as it uses a double-consensus mechanism that requires Proof of Work (PoW) and Delegated Proof of Stake (DPoS) in order for users to make a trade. In other words, it confirms who has created and who owns something before it allows for that thing to exchange hands.

It also needs to be noted that this blockchain supports many different services through its own token, called ABEY. These include the ACT stablecoin, which is pegged at 1:1 USDT. It has a decentralised storage network and a marketplace where users can sell and buy NFTs.

Other Play-to-Earn Games on the Blockchain

The Puppy Planet game isn’t the only play-to-earn game out there. In fact, this genre is on the rise all across the crypto world.

Below are three other games you may want to try out.

Coin Hunt World is a geo-location game that is similar to geocaching.

To play it, you’ll need to download the app and walk around your neighbourhood collecting virtual, floating blue keys which can then be submitted to a vault. Following a quiz question which you need to answer correctly, you will be awarded actual Bitcoin and Ethereum coins as rewards – yes, really!

What’s even better is that this game is totally free to play!

Blankos Block Party is an NFT, open-world game developed by a team that’s worked on huge, global gaming hits like Guitar Hero and World of Warcraft.

Playing here is super fun, as you get to use your NFT characters called ‘Blankos’ to race against other players, play TAG, and dance.

The game itself is free to play, and has some really sleek graphics. In fact, we’d recommend playing it on a good laptop or desktop – preferably a gaming one.

Axie Infinity is the most famous and popular play-to-earn game out there – it’s even credited as the inspiration behind Puppy Planet.

In this strategy game, users get to use their in-game, NFT creatures, called ‘Axies’, to battle other opponents, farm the land, and go on adventures.

This game is not free to play. In fact, you’ll need to buy three Axies just to join, but the more you engage with the game, the more AXS tokens you will receive.

The PUP and ABEY tokens are just two types of cryptocurrency accepted at crypto casinos.

But there are some lesser-known ones, as well as services, you may wish to look into. These include:

Binance is an online exchange through which users can sell and buy cryptocurrencies. Through this, players can exchange LINK tokens to other, more popular digital currencies. See all Binance casinos.

EOS is the world’s 23rd top cryptocurrency, and was developed to offer users scalable blockchain and lightning-fast transactions. See all EOS casinos.

NEM, which is short for ‘New Economy Movement’, is a digital blockchain that first hit the scene in 2015. This is cheaper and faster than Bitcoin, making it perfect for gaming. See all NEM casinos.

Stellar was developed in 2015 specifically for peer-to-peer, cross-border transfers. This cryptocurrency is super-fast, safe, and user-friendly. See all Stellar casinos.

TRON is another cryptocurrency launched within the last decade, with its aim being to eliminate the middleman when sharing content and entertainment. See all TRON casinos.

TETHER, which is often referred to as USDT, is one of the most popular stablecoins around, with its value pegged to that of the US dollar. This makes it a great choice for investors. See all TETHER casinos.

Puppy Planet follows in the footsteps of many play-to-earn games out there, but it’s got one thing many of them don’t: cute, 3D puppies! In fact, we think it’s super fun, and judging by its initial success, many others have high hopes for the first gaming platform built on the ABEYCHAIN.

In Puppy Planet, players can use their 3D NFT puppies to create other puppies, farm them, and even to battle other puppies. Throughout the whole process, you can earn rewards or PUP tokens.

NFT pets are basically animal characters that exist in a digital format. Because they are NFTs, no two are alike and no one can ever have the same one you do. Technically, NFT pets are also digital assets, as they can be bought, sold, or exchanged for cryptocurrency.

Not at all! NFTs are digital assets that are non-fungible, which means that they cannot be replicated. Cryptocurrencies are also digital assets, but they are fungible. So, you can trade one bitcoin for another bitcoin that’s exactly the same, but no two NFTs can ever be alike.

Yes – over and above the traditional safety features associated with blockchain (such as that it is hard to hack), ABEYCHAIN uses a double-consensus system to ensure both the creator and the owner of each NFT is confirmed before each transaction.

Puppy Planet has already launched, and you can play it at PuppyPlanet.io.