Casinos where you can play Guns 'n' Roses 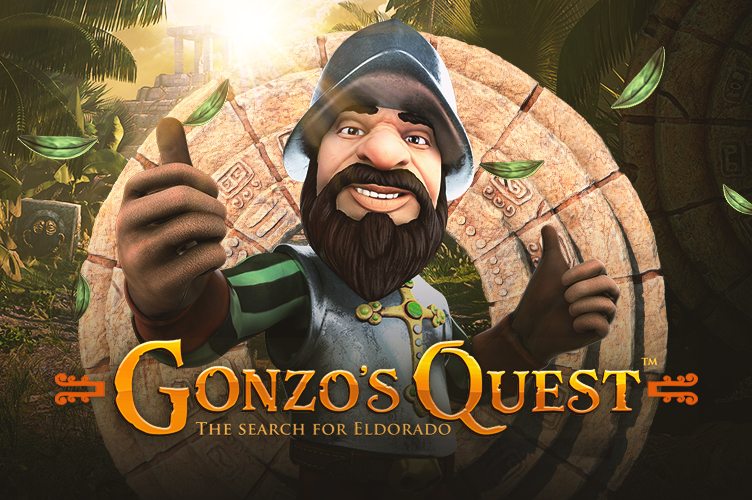 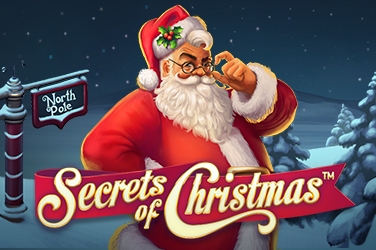 Have you always fantasised about being a famous musician or meeting one in the flesh? Join Axl Rose & co. in this Guns N' Roses slot for a momentous rock performance, filled with sticky wilds, legendary free spins, multipliers, and more! So, join us for an explosive breakdown of this undisputed rock gem!

Branded slots featuring real-life elements, settings, and characters, such as musicians, actors, or performers have been at the forefront of innovation in the past few years. Extremely popular with players who are eager to bring their favourite rock heroes to the reels, such games also represent a key partnership between bands, Hollywood, and the online gambling industry.

NetEnt is a true pioneer in this regard – to celebrate over 20 years of activity, in 2016, the developer brought us an iconic rock-themed slots series, which included three games that later became blockbusters: Guns N’ Roses Slot, Jimi Hendrix and Motörhead.

From its design to its soundtrack, we can clearly see that it’s a hearty tribute to Guns N’ Roses – one of the most popular rock bands in history, having sold over 100 million records worldwide.

Authenticity and realism define this slot, with Axl Rose, Slash, and the other band members making a legendary appearance on the reels in animated form, alongside vinyl records and guitar picks.

There is a set list that you can tailor to your liking as you spin, which contains the band’s most memorable hits, such as ‘Sweet Child O’ Mine’ and ‘November Rain’. 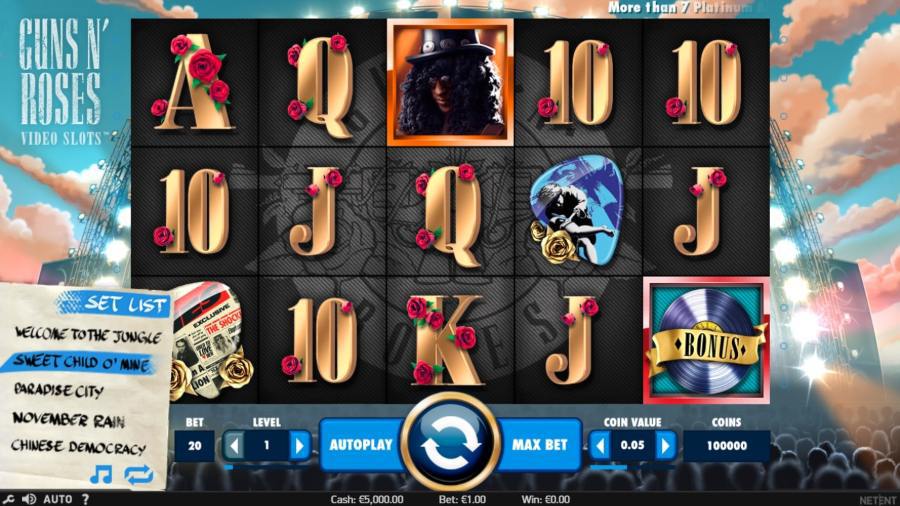 Booking that front-row ticket may just be worth it since the Guns N’ Roses slot is filled to the brim with extras that will keep you headbanging from the base game to the bonus rounds!

It appears that NetEnt have managed to create an exciting journey filled with wild substitutions, increasing win multipliers, free spins, respins, and an original bonus round.

The base game starts things off with a bang, allowing players to randomly trigger three different modifiers, namely the Legend Spins, the Appetite for Destruction Wild, and the Solo Multiplier.

And the bonus rounds are just as lucrative! If you match the right number of scatters on the reels, spinning the bonus wheel can bring you three different outcomes: Encore Free Spins, the Crowd-Pleaser Bonus, or a cash prize.

So, grab your favourite guitar pick and let’s get strumming as we unpack all of them together.

The Legend Respins feature is activated randomly in the base game and awards you three respins total. You will receive a stacked wild symbol on the first spin, followed by two respins with two stacked Wild reels.

During the Legend Respins feature, no bonus symbols will land on the playing board.

The second extra you can trigger randomly in the base game is called the Solo Multiplier. Once a win has been registered on the first three reels, players will receive an increasing win multiplier ranging from 4x to 10x.

Visually, NetEnt made this even more exciting…wait for it: when the player triggers a particularly impressive win, the background will display real footage from a Guns N’ Roses concert! 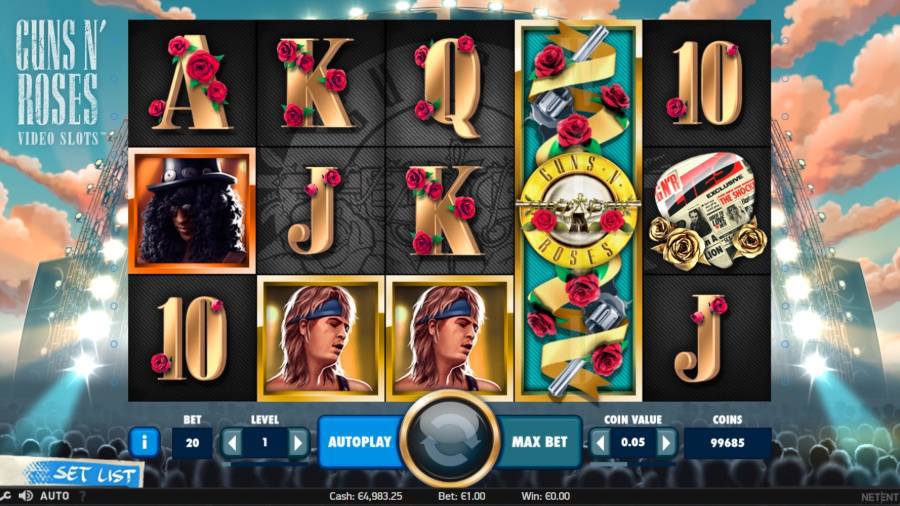 The third and final base game modifier is the Appetite for Destruction Wild. When it comes to play, a cross symbol will overlay itself on top of the reels in three different positions.

Because the cross is a wild symbol, it will replace all regular paying symbols – except for the scatter – to help you complete a winning combination.

See, when you match three Scatter symbols (the Vinyl Record with ‘Bonus’ imprinted on top) on reels 1, 3, and 5 during the base game, you’ll be presented with a Bonus Wheel. All you have to do is click on it to stop it from spinning; the question is, which one of these three outcomes will you land on: 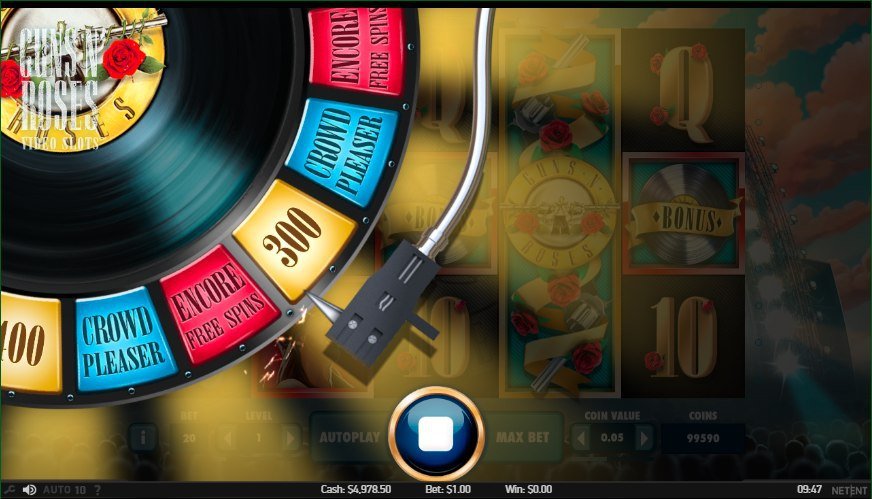 Guns N’ Roses slot machine has an estimated RTP score of 96.98%, which is already quite generous and above average. The best news is that activating various bonus features enables players to have an even higher RTP score – all the way up to 99.05%.

We’re also happy to see a good hit rate of 28% in the base game, which means roughly a third of your spins have the potential to trigger a win.

Because of the slot’s low/medium variance level, it’s a perfect choice for casual players. 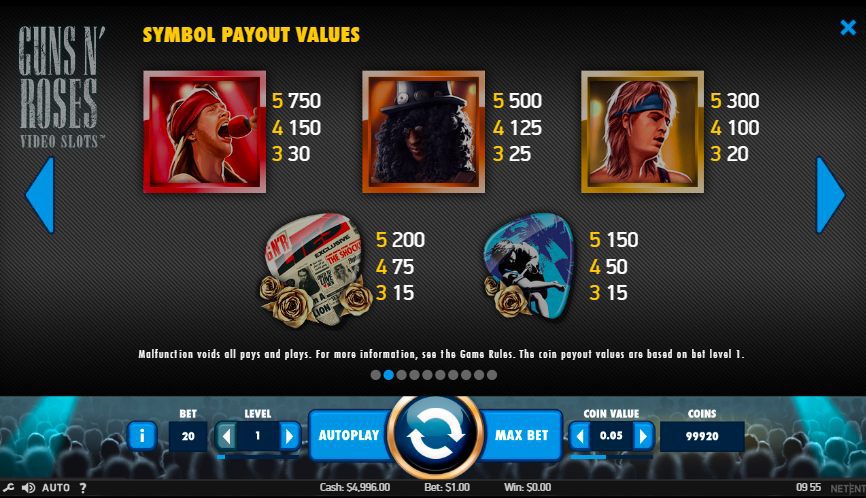 If your dream as a child was to hop onto stage and rock out with your favourite idols, this slot will spark up mountains of nostalgia.

Indeed, this game excels in recreating the atmosphere and feel of a real rock concert: the background is illuminated by shiny performance lights from the grand stage, while the contours of the audience members head-banging can be spotted in the lower side of the screen.

The main reels introduce us to the band members as we’ve never seen them before – Axl Rose, Slash, and Duff enchant us with explosive riffs and vocals, and we have the freedom to select our favourite tunes from the set list.

There is a lot of attention to detail that we can spot in the special symbols, too. This includes the intricate design of the guitar picks to the realistic guns and roses, and the rockers' trademark outfits, including Axl Rose’s famous red bandana.

For this fiery live show, NetEnt allows players to choose from 10 different betting levels, with coin values ranging from 0.01 to 1.

Even though this branded slot was released back in 2016, it still bears all the hallmarks of a high-quality NetEnt creation.

The game was brought to life using modern HTML5 technology, and this can be seen in the HD quality of the visuals, graphics, and animations.

That also means you can play the game on desktops, laptops, or mobile devices that run on Android/iOS, without sacrificing any aspect of the experience. Don’t forget to use landscape mode, as this screen orientation works best with the reel layout.

If you’re ready to spin on the go from a smartphone or tablet, you can try the slot for free on our page. Alternatively, you can register on a Guns N’ Roses casino from our list above to play with real money. 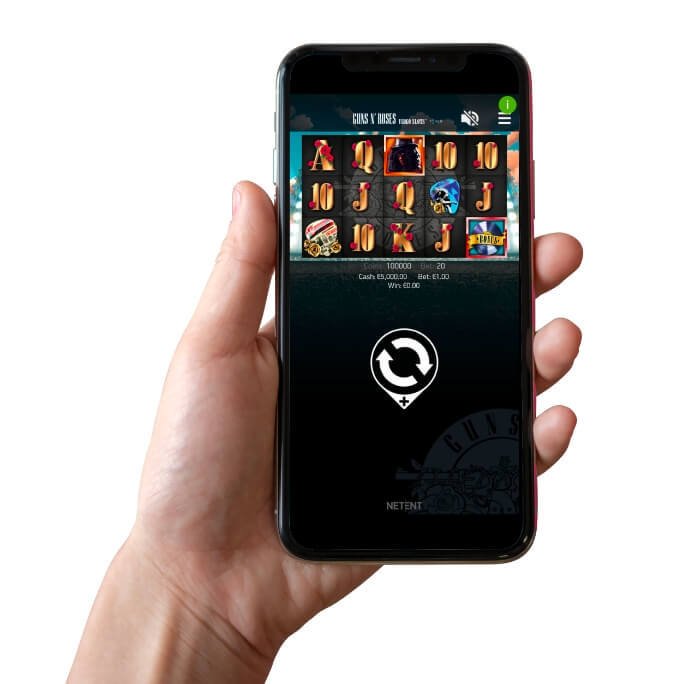 Does this game have what it takes to rock your world? Here’s what to consider before dusting that spiky leather jacket from your closet and heading for the concert:

NetEnt has proven repeatedly that they have the right tools to create memorable branded slots with musical themes. Indeed, the Guns N' Roses slot captures the heart, rebellious streak, and soul of rock music, and it’s an outstanding tribute to one of the best-selling acts in history.

We are pleased to see the developers enchant rock fans with so many types of Wild symbols, free spins, and interactive bonus games, all to the beat of November Rain and other emblematic songs. Whether you trigger the bonuses randomly or pick them yourself in the Crowd Pleaser, this concert has no dull moments we can think of!

Check out our other slot reviews!

Psst! Don’t leave just yet – if you liked what you’ve read so far, we have even more online slot reviews – grab them while they’re warm and pick your fave today!

Other Slots To Check Out

Guns N' Roses has an estimated RTP (Return-To-Player) rate of 96.98%. Different RTP modes are also available, depending on the features that are active and the casino you play at.

You can play Guns N’ Roses slot in demo version right here, on our page, or sign up for one of the recommended casinos above.

Unfortunately, no. The Encore Free Spins feature ends after 10 extra spins and they can’t be re-triggered.