Chemin de Fer, French for railroad, and commonly referred to as Chemmy is the form of Baccarat that was most widely played in Europe. The name refers both to the speed of the game – it was played faster than the original form of Baccarat – and to the movement of the shoe, which moves around the table as a train moves around it’s tracks.

It was the game most played at the private clubs which preceded casinos in the UK, and is still considered to be the most glamorous of all casino games. In modern times, it is quite rare to find a game in a casino, and it has been almost entirely superseded by Punto Banco. 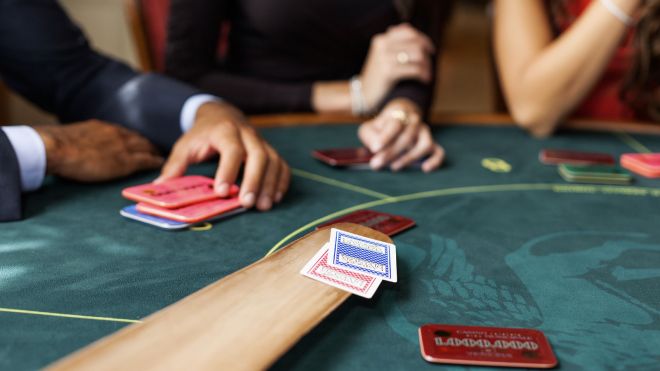 The premise of the game is identical to Punto Banco. Two hands are dealt, one to the banker and one player hand, which all other players may bet on. The winner of each coup (hand) is the player with the total hand value closest to nine. Scores are calculated in exactly the same way as in Punto Banco, with aces worth one point, twos to nines worth the value of the card, and tens and face cards worth nothing. Where the total value of a hand is greater than nine, the tens digit is disregarded.

Gameplay is somewhat different to Punto Banco. The shoe begins the game with the player to the right of the croupier, who is designated the banker. The banker deals all cards, and retains his position as banker until he loses a hand to the player or passes. At that point, the shoe moves anticlockwise around the table, and a player becomes the dealer.

There are intricacies with the betting structure that do not exist in other variants of Baccarat. The banker is the first to bet, and will determine how much can be risked on that coup, subject to table minimums. The banker must bet on his own hand. Following the bankers bet, betting goes to each player around the table, again moving anticlockwise. The total bets on the player hand may not exceed the bet made by the banker. Should the bets grow too large, the banker can choose to match the excess or to have it removed from the table. At any point, a player may bet the total value of the banker’s wager by declaring banque – this could be likened to moving all in at the poker table. Unlike Punto Banco, players do not have the option to bet on a victory for the banker.

Following the round of betting, the rest of the coup now unfolds. Again, the procedure is similar to other Baccarat variants, but has some key differences. In Chemin de Fer, cards are dealt face down, with the player hand seen only by the player who placed the largest bet, and the banker hand only seen by the banker. If either hand is a natural – a total of eight or nine – this is declared immediately and the coup is over and a winner declared. If neither player has a natural, extra cards may be drawn.

Herein lies the biggest difference from Punto Banco. Whereas in that game, cards are dealt according to predetermined rules, in Chemin de Fer, the player must decide whether to take a third card or to stand pat.

This choice is not to be taken lightly, as often a player’s choice affects not only the outcome of his own wager, but of all players that have bet with him. A player making poor choices could cost the whole table very dearly!

As such, a standard set of actions was established, and is almost universally followed. When the player holds a hand of value zero to four, he or she will always draw a card. When a player’s hand is worth six or seven, the choice is to stand pat. Only when the player’s total is exactly five must he or she choose whether to draw. The correct strategy is to swap between standing pat and drawing a card – a perfect strategy approximates to drawing a card three quarters of the time as the player, and standing the remaining quarter of the time. Aggressive players who always draw are known as tireurs, which is French for shooter, timid players who always opt to stand are called non-tireurs, and people who (correctly) waver between the two options are called douteurs. Reading a player’s style is essential to making a coup of Chemin de Fer a winning proposition.

Essentially, a player may win by deceiving the banker to make him or her believe he is playing more aggressively, or more passively, than in reality he is. A successful strategy for the banker consists of mimicking the player’s standing and drawing strategies effectively.

One element of the beauty of Chemin de Fer is in how evenly matched it is. Ignoring the commission taken by the house, the banker has a very small edge of about one percent, but of course must risk more money on each coup than the players. The player, in turn, will lose one percent of his bet to the banker on average.

Where to play in the UK

Nowadays, it is very difficult to find a game of Chemin de Fer in the UK! Punto Banco is faster (and therefore more profitable to the casino) and more understandable and straightforward to the uninitiated. It is now by far the most popular form of Baccarat. Should you have a group of 8 willing participants, a private club may set up a table for you if the stakes are sufficient.

Sign up to regular updates of the latest promotions and offers, both online and off. We will never share your address outside this site and you can unsuibscribe at any time.